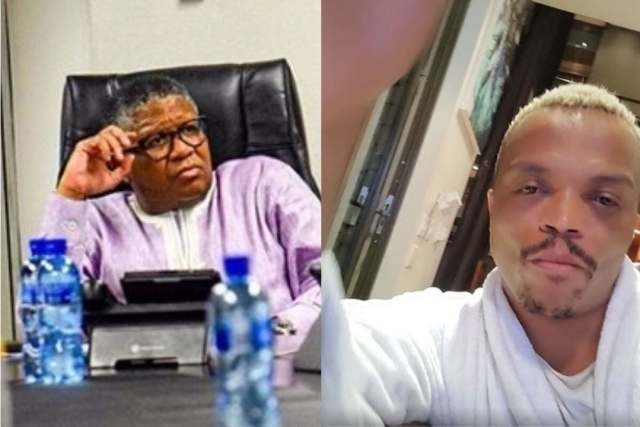 Hours before President Cyril Ramaphosa announced that SA’s coronavirus lockdown would be extended until the end of April, Mhlongo had asserted in an Instagram video that Mbalula had given him a heads-up about the extension.

Mhlongo subsequently apologized to Mbalula for his “joke”, saying: “I’m just like you, I did not know about it. I was just guessing.”

I have noted Mr Mhlongo’s apology however I do not view his utterances as mere joke, the country is going through a serious disaster management period and any misinformation, irregular or unauthorized information being published is both unlawful and not assisting in our cause to manage public affairs carefully,” Minister Mbalula said.
“Even though Mr Mhlongo guessed it right in his speculative discussion – he went further to mislead the public about the source of his information which undermines and is preemptive on Government and the President over very sensitive information of a national security caliber of which I am very sensitive to and have adhered to in all my time in the executive,”

“As I did not discuss the lockdown timeline or extension plans with Mr Mhlongo at all whatsoever and to this end my conscience is clear and prepared to attest to this under oath – having served in multiple cabinets,” Mbalula added.

Mr Mhlongo acted very recklessly and irresponsibly. Name dropping has caused enough harm in our discourse before and we must now nib it in the bud.

Dineo Ranaka,is expected to be a state witness, and was subpoenaed by the National Prosecuting Authority to answer questions in relation to the case of misinformation or spreading of fake news opened by Mbalula at Sandton police station last year.

The startling news that Ranaka had given a differing view from that of Mhlongo was revealed by a law agent who did not want to be named because they were not allowed to speak to the media.

The source said the matter started when Mhlongo, in his preparation for the trial, made representations through his lawyers in which he said that he was only joking when he said Mbalula informed him that Ramaphosa was going to put the country on alert level 2 of lockdown. The mole, who is close to the case, said Ranaka has in the statement sent to the prosecutors contradicted Mhlongo’s version of events.

She said, added the agent, Mhlongo did not indicate immediately that he was joking when he made the announcement.

She said Mhlongo only announced later that his remarks about Mbalula and the lockdown were a bad joke and later apologized to the politician.

“That is the problem because he only said he was joking later. So, Dineo couldn’t lie under oath because she could be charged with perjury. She had to tell the truth,” said the agent.

However, the apology was not enough for Mbalula, who retaliated by opening a case against him.

Somizi handed himself at the Sandton police station in April last year and was later released on R1000 bail. He is expected back in court soon.

The source said the hearing is likely to be delayed as Ranaka’s and Mhlongo’s lawyers were raising questions about the legalities of hearing the case at the Randburg magistrate’s court.

“First, they argued that Mbalula was not supposed have been to open the case Sandton police station the offence happened in Auckland Park, where Metro FM or SABC studios are located.

“So, this might actually derail the trial or the hearing as they want to push that the matter does not belong there and should be transferred to Joburg [magistrate] court,” said the source. National Prosecuting Authority South Gauteng spokesperson Phindi Mjonondwane couldn’t confirm or deny that Ranaka has contradicted Somizi’s version of events, but said the prosecutors have subpoenaed her to answer certain questions. She said Ranaka has been instructed to answer the prosecutors’ questions by end of business tomorrow.

She couldn’t lie under oath because she could be charged with perjury.