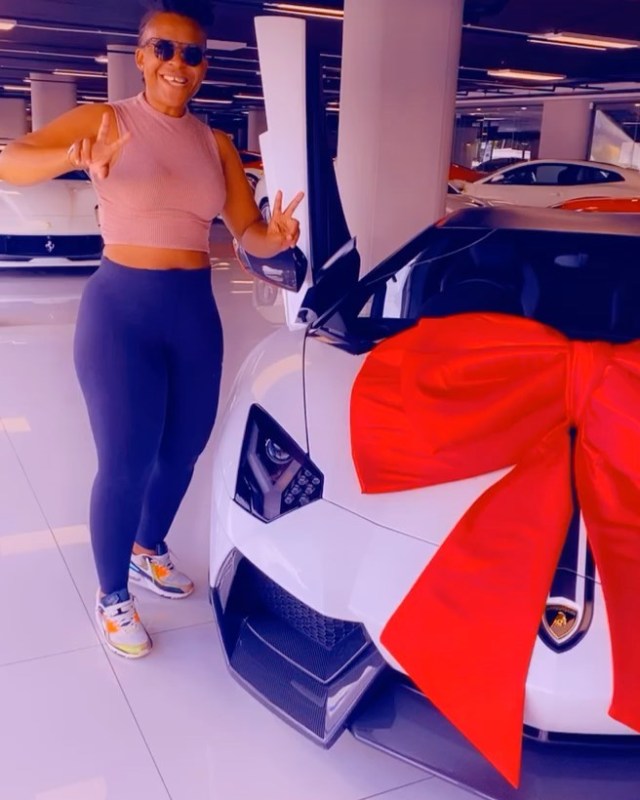 Politician and businessman, Kenny Kunene who is the leader of Patriotic Alliance has reported that media personality, Zodwa Wabantu has returned her new Lamborghini she just purchased this past Monday because of SARS.

The entertainer caught the attention of SARS when she posted a video of herself buying a R10million Lamborghini with Kunene cheering in the background in the video on her Instagram this past Monday.

Though Zodwa has not officially addressed claims that her Lambo is gone, Kunene spoke to both TshisaLIVE and Daily Sun and confirmed that she had to return the car after receiving an SMS from SARS on Monday.

“Zodwa has decided not to buy the car anymore because after she posted the video celebrating, she got a call from SARS requesting to have a meeting with her. She figured out that it might have been because of the post so she then decided to not buy the car for now.

It is sad that in this country you can’t freely celebrate getting yourself anything without anyone hovering around you.”

Kunene also stated in the interviews that until the matter between Zodwa and SARS is resolved, the purchasing of the Lambo will be placed on ice. Kunene denied to comment on claims that he was the one that actually bought the Lambo for her.

A SARS media executive also refused to comment on the matter:
“The law doesn’t allow us to comment on people’s personal tax matters as they are confidential.”

This is the second time this year that the entertainer and the politician make headlines, as the two were trending a few days ago when it was revealed that Zodwa joined Kunene’s political party, Patriotic Alliance .

The star shocked Mzansi when she announced that she joined Kenny Kunene’s political party in Johannesburg on the 31st of January.

This is what she had to say about joining the political party:

“I was convinced this is the only political that is relevant in South Africa in this day and age. The party’s commitment to the upliftment of communities is what impressed me most. Remember I’m a township girl and I spend a lot of time in the kasi. It breaks my heart to see the misery that people in kasi go through despite them voting in every election.

Most people fear change, but why cling to a political party that has done nothing for you and has demonstrated that its leaders come first not the people.”