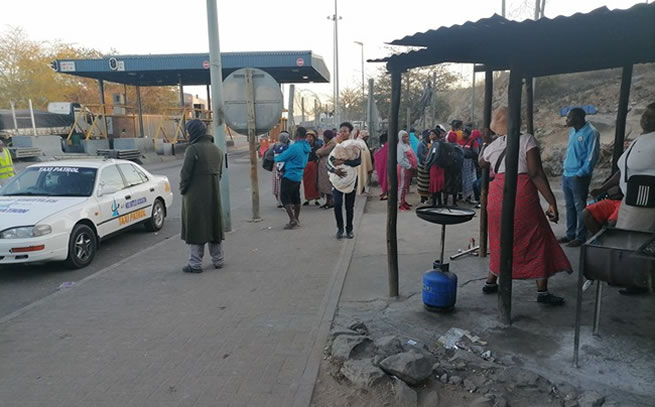 – At Beitbridge border post, people returning to Zimbabwe are being stopped from leaving by border guards, because they do not have valid documents.
– People we spoke to eventually crossed the border through unofficial routes that can be dangerous.
– Immigrant rights organisations have criticised the way the South African government is managing the situation it has created by scrapping the Zimbabwean Exemption Permit.

The six-month extension to June 2023 of the Zimbabwean Exemption Permit (ZEP) brings some relief to nearly 180,000 permit holders, but many families are still opting to voluntarily return to Zimbabwe. The ZEP permit was to expire at the end of December 2022, leaving almost all of these permit holders undocumented.

However, some Zimbabweans trying to leave South Africa at the Beitbridge border are being stopped from returning, because they don’t have valid documents.

This is possibly the result of the introduction of 200 armed Border Management Authority (BMA) guards in Musina, Limpopo. The guards are deployed at five “identified vulnerable parts” of the border and work with members of the South African National Defence Force. The BMA will be South Africa’s single authority for border management and is expected to be fully set up by April 2023.

We recently spent two days at the border.

An informal trader at Beitbridge told us:
I cannot stand the current wave of vigilantism in South Africa.

“The only possible option is going back home to Zimbabwe. The wave [of xenophobia] seems to be spreading to all provinces. It’s better I leave before this life threatening situation is upon us.”

She used to travel home almost every two weeks to visit her two children. But since 2011, as the situation in Zimbabwe continued to deteriorate, she decided to stay in South Africa and run her informal business.

She wants to return home but cannot do so under the new border rules. We met her with a group trying to cross on foot.

She said:
We are ordered to go back to South Africa, but if we go back, we risk being arrested. We are really stuck.

We witnessed many people, carrying their belongings, trying to figure out how they could safely return to Zimbabwe through unlawful routes.

Another informal trader, in Musina since 2010, also did not have the required documents and had to travel home using an unlawful route. She said she moved to South Africa to work and support her elderly parents and her two children back in Zimbabwe. She said she worries about their quality of life now that she will no longer be sending cash home to support them.

Immigrant rights organisations, such as Scalabrini and the People Against Suffering, Oppression and Poverty (PASSOP), have criticised the way the South African government is managing immigration.

Victor Chikalongwe, of Passop, said: “I believe if people would like to go back to their respective countries they should be allowed to pass through the normal port of entry. If any unit of the government is denying them a chance, then they are risking the lives of these people.”

Dale McKinley, from the Kopanang Africa Against Xenophobia, said: “Are they going to arrest Zimbabweans and send them back to Lindela prison and deport them later? This could be a waste of taxpayers’ money. Forcing people to return through illegal routes will only make them more vulnerable.”

The Department of Home Affairs has been promising to respond to our questions for two weeks but did not do so.

James Chapman, of Scalabrini, referred us to a statement on its Facebook page: “We are concerned that while ZEPs have been extended, the barriers and challenges faced by ZEP holders who wish to access mainstream immigration visas remain in place. The requirements for mainstream visas are not attainable for most ZEP holders, and waivers of certain requirements are difficult to access and not readily issued. We continue to advocate for reducing the barriers encountered in trying to access immigration visas.”