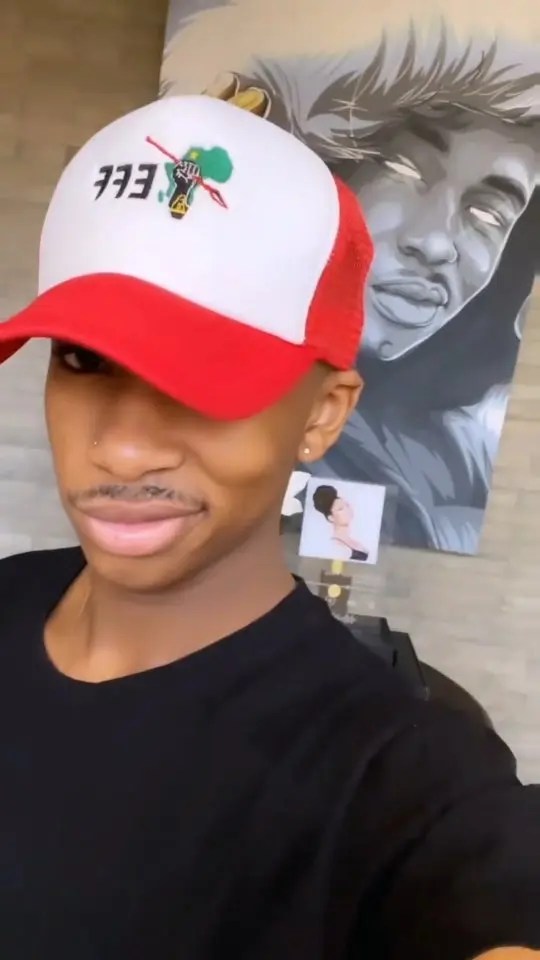 As the municipal elections are underway in Mzansi, TV personality Lasizwe Dambuza has publicly endorsed his favourite party and he is not bothered by those targeting celebrities for their political affiliation.

The openly gay star also been campaigning for the Economic Freedom Fighters (EFF) in the local government elections and it has been revealed that he is the EFF’s President For The LGBTQI+ community.

Tweeps are not impressed with celebs getting paid to mobilize them to vote for their favourite parties. This is as they often use their influence and power to persuade voters and some just do it for the money. Pearl Thusi admitted to her mistake, saying she only wanted to put food on the table and had rent to pay when she rallied with the ANC and DA.

Another star who recently received backlash on social media for sharing a picture of her wearing an ANC inspired regalia is Makhadzi.

She ruffled major feathers on social media for being affiliated with the party. Makhadzi had been invited to meet the country’s president Cyril. After sharing the snap on her Twitter account, Twitter users slammed her.

She even had to delete the picture as it ignited outrage online and controversial poet Ntsiki Mazwai came for her. She took to her Facebook account to pen a lengthy open letter to the Matorokisi hitmaker dragging her for supporting the ruling party.

She said she has worked hard to build her brand and it she is not worth “prostituting” herself for their campaigns.” You are too powerful to cheapen your brand by aligning it with the Phoenix massacre and the burning of food looted by the poor. You are too powerful to involve yourself in the power plays of old men hanging onto expired power.

Unlike Brenda Fassie, who wore the ANC colors at the dawn of democracy… We had never had a black president before. So when Brenda Fassie put on those colors they represented something powerful. The only thing ANC represents right now is poverty, corruption and elitism. Are you sure you want to pick sides so early in your career? ANC used to be a liberation movement, but what has it become today?

In ending she advised her to guard her integrity and influence.” My advice to you is to guard your integrity and influence with your life, don’t allow your beautiful gift to be used to sanitize politicians, that’s not your role. The politicians must compete in service delivery and stop trying to ride your wave for relevance. Sister you matter right now, in your freedom of association please remember that your fan base spreads across the t-shirts. When you choose a color you alienate the others.