Why Muvhango’s New Hulisani Responded To Being Hated

Why Muvhango’s New Hulisani Responded To Being Hated 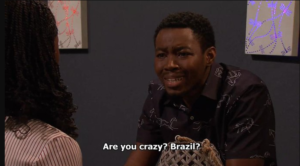 Muvhango took social media by storm last year when they replaced Khathu Ramabulana who played the first Hulisani with Burnett Gededger who plays the new Hulisani.

Although entertainment commentator, Phil Mphela hinted that the Queen Sono actor, Khathu Ramabulana had abruptly resigned from the show a few months back, Muvhango itself didn’t warn its fans on their social media…

Now Gededger who is super active on social media with 17k followers, has come out and replied to all the hate he’s received since his big break on the show.

“I don’t think I’ve ever received such a wide scale of hate projected at me like this. It’s mind blowing. Peace be with all their hearts.”

The fact of the matter is Muvhango’s fans were left in a state of confusion and fury because Ramabulana was one of their favorite actors on the show and Hulisani, was their favourite character before Burnet arrived.

The fans realised how great Ramabulana was and how better he was at portraying Hulisani when Burnett arrived.

Besides being less experienced in acting, in comparison with Ramabulana, he also seems younger than his on-screen wife, Rendani which they didn’t pick up with Ramabulana.

Ramabulana was more charming and carried the character well, whereas Burnett seems confused or lost half the time…he appears to be nervous!

Here are some reactions from viewers:

“He seems dumber than the previous Hulisani.’’

“What happen to the old one. I saw him last week moes.”

“Hai this one looks like he was hired ka di back doors. It’s painful for him to act .”

Hulisani is a recovering addict…addicted to gambling! His marriage appeared to be ending when he gambled his house, car and lost. His actions led to Rendani deciding that she won’t have kids with him in the future because he’s irresponsible.

Their marriage was falling apart because they didn’t know much about one another. The two eloped and didn’t follow tradition by paying lobola. Rendani’s family predicted that they wouldn’t make it. But that’s all in the past as Hulisani is in therapy and Rendani has moved back home.

Here is Ramabulana as the first Hulisani:

When temptation comes to your door what do you say? #Muvhango pic.twitter.com/sXIMulExJp