We’re back! – It’s better to be killed by Operation Dudula members than to die of poverty in Zimbabwe

We’re back! – It’s better to be killed by Operation Dudula members than to die of poverty in Zimbabwe 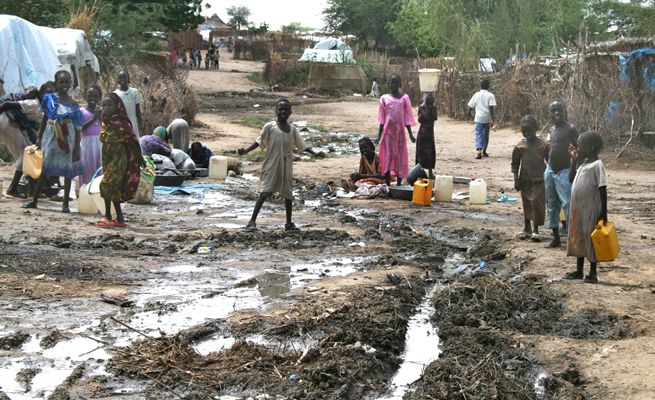 Hundreds of Zimbabwean nationals left South Africa and returned home earlier this year after attacks on foreign nationals began spreading across the provinces. Many were also faced with a looming December 2022 deadline for the Zimbabwean Exemption Permit (ZEP) to expire.

Now, a number of those Zimbabweans are making their way back to South Africa. This comes after the ZEP was extended by six months to 30 June 2023. The extension brings some relief to nearly 180,000 permit holders, but while some families are still opting to voluntarily return to Zimbabwe, others are once again heading for South Africa, saying that life is unbearable back home.

One of them is Lazarus Chinhara, a visually impaired Zimbabwean father of three. Chinhara lives in Joburg’s “building of darkness”. He scrapes by on begging from passersby, something he’s done for more than 14 years.

When others chose to stay and deal with the ongoing Operation Dudula threats, Chinhara left the country at the end of August 2022, fearing for his life. With only R600 in his pocket — R400 short of the bus fare back to Zimbabwe from Johannesburg — Chinhara negotiated his way home.

“When those actions of Operation Dudula intensified, I headed back home because we were forced to vacate our building. I was thinking that at the end of the day I will be homeless… These Dudula people were becoming more dangerous and were promising that they will kill us. We were consulting the police — in particular, the Jeppe police — but they did not give us any assistance. It felt like we were vulnerable and not protected. Also, our ability to move to our everyday activities was limited to such an extent that putting food on the table was difficult.”

Daily Maverick visited Jeppe police station to ask what the police were doing to ensure that occupants of the building were protected.

The station’s spokesperson, Richard Munyayi, told Daily Maverick there was no record of reports of harassment or intimidation by those living in the building, and for that reason they weren’t able to do anything.

Life back in Zimbabwe

Chinhara said that when he arrived home, he realised that the situation was worse than it was in South Africa.

“Despite the harassment and intimidation while in South Africa, I was able to put something on the table and send my children to school without too many hassles. In Zimbabwe, prices of necessities are high and they skyrocket at any given time… only a few can afford basics. It’s even worse if you are not working or doing something that can generate an income… you will not have the chance of buying food or sending your children to school or buying them what is needed at school.

“I also noticed that everything is politicised — maybe it’s because we are coming towards elections…. People like me, living with disabilities, we are a minority and politics is a game of numbers, so sometimes we are not considered in decision-making spaces. Our issues are not taken into account. We are represented as the poorest of the poor mainly because of negative societal attitudes towards us, which leads to us being excluded from all forms of social, political and economic participation… What further fuels our marginalisation is the fact that disability in Zimbabwe is viewed on a medical basis, with the gatekeepers of charity taking the leading role, while government occupies the back seat,” said Chinhara.

“We only had a national disability policy introduced last year, since 1980 when Zimbabwe got its independence. Disability in Zimbabwe is viewed as a personal tragedy rather than a social issue… we are depicted as the most expensive part of the population and therefore reduced to objects of the state instead of citizens with their rights.

According to the World Bank, almost half of Zimbabwe’s population fell into extreme poverty between 2011 and 2021, with children bearing the brunt of the misery.

“The number of extreme poor [in Zimbabwe] was expected to remain at 7.9 million in 2021 amid continued elevated prices, and a slow recovery of jobs and wages in the formal and informal sectors,” said the World Bank report.

Zimbabwe’s economic instability has been aggravated by significant shocks including Russia’s war in Ukraine, poor rainfall and price pressures adversely affecting economic and social conditions, already battered by the pandemic.

As a result, the circulation of money in Zimbabwe is very slow as unemployment is too high, which in turn affects livelihoods.

GroundUp reported last month on a Zimbabwean teacher who says he made more money as a citrus farm labourer in Gqeberha, South Africa, than he did teaching Maths in his hometown.

Chinhara said he decided to come back to South Africa and is now once again living in the “building of darkness”, despite ongoing xenophobic threats.

He said he wants to save enough money to start a butchery in his hometown so he is able to earn a living to feed his family and make sure his children get an education.

“I know the situation with Dudula could get worse at any time… Having heard what has been happening in the last few months, my family was worried about me coming back, but there is nothing at home for someone without any means of income.

“If you are in Zimbabwe doing something, you will not feel the impact of the dilapidated economy. But many who left because of attacks are making their way back to SA because the poverty situation at home is worsening.”