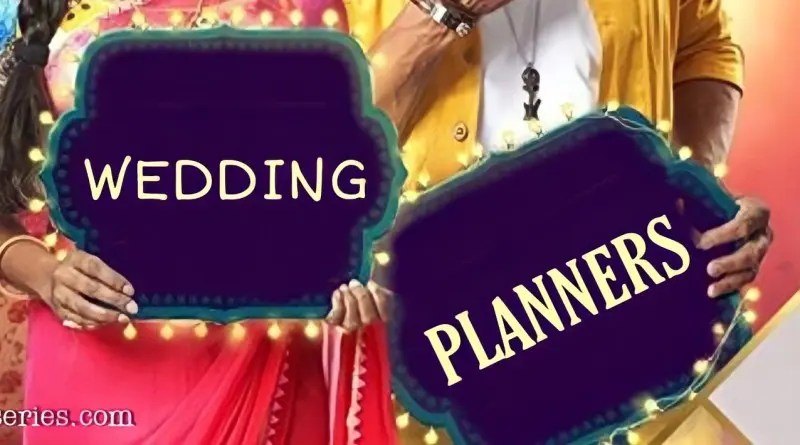 Coming up on Wedding Planners this December 2021: Nandini employs cunning tactics and indirectly taunts Preeti. Later, she executes a ploy to target Preeti and embarrass K.T in front of his family.

Preeti gets a special gift from K.T. for her Mooh Dikhai ceremony. While Juhi gives Preeti some advice, Nandini stops by K.T. and Preeti’s office.

Nandini employs cunning tactics and indirectly taunts Preeti. Later, she executes a ploy to target Preeti and embarrass K.T in front of his family.

K.T and his mother vent their fury on Preeti for bringing Nandini home. Later, Preeti questions K.T for intending to get her name inked.

Preeti visits Nandini and asks her to go back to Singapore. While K.T. gets advice from his father, Preeti makes a bold move during the family Puja.

Preeti asks K.T. why he is adamant on wanting Nandini out of his life. Later, as Priyanka confides in Neel, Kusum makes a huge sacrifice.

Nandini and K.T. go in search of Arjun after she puts up a pretentious act. While Kusum consoles a heartbroken Priyanka, Arjun confronts Preeti.

Nandini’s plan fails while Preeti decides to get to the bottom of K.T. and Arjun’s relationship. Later, Preeti and K.T. inadvertently have a romantic moment.

Preeti tries to convince K.T for the DNA test while Nandini pleads with him to accept Arjun as his son. Later, Preeti realises that she is in love with K.T.

K.T. brings Nandini to the house on Arjun’s insistence, putting Preeti in a tough spot. In the meantime, Rati visits Kusum with a sly intention.

Unaware of her feelings for him, K.T requests Preeti to pretend to be happy with him. Later, Preeti sees Nandini in K.T’s room.

Preeti puts forth a shocking challenge before Nandini. With an evil motive in mind, Rati and Nandini team up against her.

Preeti is shocked when K.T helps her bake a cake, but soon she realises that he intends to make Nandini jealous. Later, Nandini decides to seek revenge on Preeti.

K.T. and Preeti engage in a romantic moment. While K.T. puts forth a heartfelt request before her, she makes a shocking decision.

Neelima humiliates Priyanka at the party while Nandini brews a cunning plan against Preeti. Later, Preeti tries to stop K.T. from confronting Nandini.

K.T. and Preeti perform a romantic dance during the Christmas party. Later, K.T. gets intoxicated and confronts Preeti as Nandini humiliates them.

Preeti vows to restore K.T. back to his usual happy self. Later, Kushala confronts Preeti while Priyanka takes a stern decision.

Preeti is left heartbroken after K.T spills about his feelings for Nandini. While Nandini takes a drastic step, Preeti faces a shocking allegation.

With a heavy heart, Preeti decides to bring Nandini and K.T. closer to each other. While Arjun apologises to K.T., Preeti makes a promise to Nandini.

Rati attempts to instigate Nandini against Preeti. While K.T. plays a mischievous prank on Preeti, Nandini is adamant to separate them from one another.

Priyanka and Neel talk about the former’s job opportunity abroad. On the other hand, Nandini is shocked to see who the principal of the college is.

Preeti uses her acting skills to convince the Principal into giving Arjun a chance in his college. At home, Nandini’s antics land Preeti in trouble.

K.T. apologises to Preeti for his misbehaviour. While Nandini confronts Preeti about her promise, K.T. brews a quirky plan to appease Neelima.

Nandini informs Rati about her cunning plan. Later, K.T. is overwhelmed as Nandini shows him some childhood photographs of Arjun.

When Shivraj gifts K.T. and Preeti tickets to Switzerland, the latter brews a plan to use the same to uncover Nandini’s real intentions. Later, Preeti unknowingly consumes alcohol.

K.T. plays a prank on Preeti. Meanwhile, Kusum learns about Priyanka’s reason for not going to UK.

Preeti approaches Chanda in college, and the latter reveals some shocking truth about Nandini’s intentions. Meanwhile, Priyanka tries to appease an angry Kusum.

K.T. insults Preeti when she fails to present any proof against Nandini. However, they meet up later and spends some happy moments. Are they in cahoots?

Arjun decides to leave the house with Nandini. While K.T. and Preeti execute their ingenious plan, Nandini grows suspicious.

During the family photo session, Nandini tries to stand next to K.T. However, Preeti executes her secret plan to teach her a lesson.

K.T. is left confused when Nandini asks him to divorce Preeti. While Preeti risks her life to execute her plan, Kusum is in for a shock.

K.T. plans a surprise for Preeti which leaves her elated. The next day, Nandini’s devious ploy puts Juhi in trouble in front of the Tibrewals.

Nandini coerces Preeti to give K.T. a divorce. While Preeti exposes Nandini’s evil plan of framing Juhi, the family receives a massive shock.

K.T makes shocking revelations to Preeti, while Nandini resolves to take revenge against him. Later, Nandini tricks K.T and initiates her vengeful plan.

K.T. and Preeti orchestrate a clever plan to uncover Nandini’s true motives. Later, Preeti rescues Tarun when he finds himself in unexpected trouble.

Nandini employs clever tactics to foil K.T and Preeti’s plan. While Nandini makes her next move against K.T and Preeti, the latter uncovers a shocking fact.

Preeti gets a bad feeling about K.T. when she finds his phone switched off. As Nandini takes K.T. to an infamous suicide point, Preeti reaches there. What will Nandini do now?

While K.T. cajoles Arjun to accept Preeti as his mother, he bluntly refuses. Later, Preeti puts forth a shocking challenge before Nandini.

Nandini’s words continue to ring in K.T.’s ears and despite Preeti’s consolation, he is heartbroken. As Preeti confronts Nandini, a fire breaks out, trapping K.T!

Neelima accepts Preeti as K.T.’s wife and performs the Grihapravesh ceremony. Later, as Tarun slaps Rati for insulting his mother, K.T. plans a surprise for Preeti.

K.T. calls Preeti for a meet up, leaving her curious and excited. However, his unexpected gesture leaves her disappointed.

Preeti decides to confess her feelings to K.T. Later, as Neelima agrees to get Neel married to Priyanka, Preeti concocts a romantic plan for K.T.

Neelima makes an emotional request to Neel for the sake of the business. Meanwhile, Preeti arranges a get together to confess her feelings for K.T.

Preeti performs a song specially for K.T at the party and confesses her love . Will K.T reciprocate her feelings?

Preeti is elated when K.T. confesses his love for her. Later, as Neelima helps Preeti get ready, K.T. tells Neel that he lied about his feelings. Why?\

Preeti and K.T. sleep under the stars, discussing their likes and dislikes while Neel takes a decision. The next day, K.T. takes Preeti out for a special surprise.

Neelima gets worried about Neel’s marriage to the daughter of the Maheshwaris. She decides to send K.T. and Preeti off to honeymoon, leaving K.T. in a fix.

Preeti shares her feelings with K.T. While Neel tries to convince the family about his love for Priyanka, K.T. does the unthinkable.

A dejected Preeti breaks down after realising that K.T. does not love her. She returns home and is shocked to find Neel getting engaged to Shikha.

A disappointed Kusum breaks all ties with Preeti after creating a scene at Neel’s engagement. While Preeti is heartbroken, K.T. makes an earnest request to Kusum.

Preeti feels shattered after losing her best friend. Later, K.T. talks to her and helps her to calm down.

Neel reveals the truth about his situation to Preeti and K.T. Later, a disguised K.T. arrives at Kusum’s house with a specific plan in mind.

Preeti and K.T. try to convince Kusum about Neel and Priyanka’s wedding. While the wedding rituals commence, Preeti demands a divorce from K.T.

Neelima grows furious after Neel arrives with Priyanka. While K.T. and Preeti meet a divorce lawyer, Kusuma tries to reconcile things between them.

While K.T. makes an emotional promise to his father, Preeti announces that she found a place to live. Later, K.T. and Preeti get into an argument.

K.T. decides to reveal the truth about his relationship with Preeti. While Neelima berates Priyanka, K.T. takes a stand for Preeti.

Premiere episodes of Wedding Planners air on Star Life from Mondays to Sundays at 21h00 and 21h30.