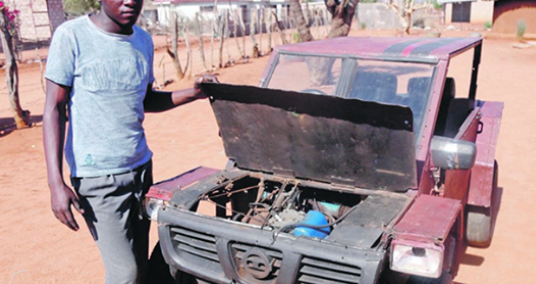 There is nothing stopping you from achieving your dreams and this young man from Limpopo proves it.

According to the Daily Sun, the Grade 10 pupil Mokgadi Machaba from Ga-Rammutla Village built and designed his dream car from various scrap parts in his village.

Machaba says it is powered by a motorbike gearbox, and uses an electric engine while the dashboard and seats come from an old BMW. The wheels cost him just R60. All the mechanical work and engineering was done all by himself.

According to the Daily Sun, he spent about R5 000 for the material used on this car, using his mother’s donkey cart to sell firewood.

Machaba says: “I kept my focus and never looked at my disadvantaged background or gave up on my dreams.”

According to the Daily Sun, Mokgadi is doing maths and physical science, which are compulsory to study mechanical engineering.

“I spent a lot of time at the scrapyard to learn about designing cars. When it breaks, I can fix it”, he said.

The Daily Sun says Machaba used his mother’s donkey cart to sell firewood: “My neighbour is a welder so I helped him for free so I could borrow his welding machine.”

His mother, Mmaselaelo Machaba (67) said: “I helped where I could. I’m alone and only have a social grant, but gave him money when I could. When he completed his car in August , he took it to school to show his teachers. On Sundays he gives me a lift to church.”