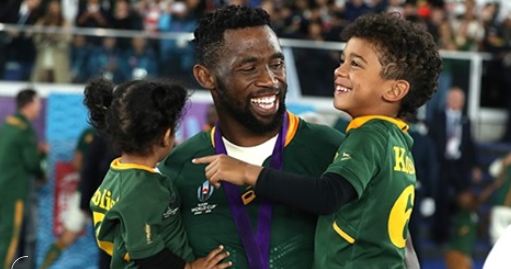 When Springbok outside centre Lukhanyo Am and Makazole Mapimpi combined to set up a try in the 66th minute of the Rugby World Cup final, the crowd at the Zwide stadium leapt out of their seats to celebrate.

They were quick to put their hands on their heads though, when referee Jerome Garces enlisted the services of the Television Match Official (TMO) for a potential forward pass in the lead up to the try.

After checking, the TMO awarded the try and the crowd continued in full voice as the Boks led 25-12.

In commentary, isiXhosa pundits Kaunda Ntunja and Makhaya Jack were still debating whether or not the game was all but finished. Jack told his co-commentator that it’s all over.

Ntunja disagreed, until winger Cheslin Kolbe left would-be tackler and England captain Owen Farrell clutching at air with neat footwork to score the Boks’ second try of the match and the score that sealed a convincing 32-12 win to lift their third World Cup in as many finals.

The win sees the Boks complete a remarkable feat as most statistics were against them: no team has lost a World Cup group match and then gone on to lift the trophy; no team has won the Rugby Championship and then won the World Cup in the same year.

The hundreds of fans at Zwide stadium also celebrated their own touching moment on Saturday.

Whenever Kolisi made a tackle, or his name was mentioned, the crowd would cheer for their hometown hero.

And at the end of the game, they got to watch one of their own sons, Siya Kolisi, lift the Webb Ellis trophy in his 50th test and 20th as captain for the Boks.