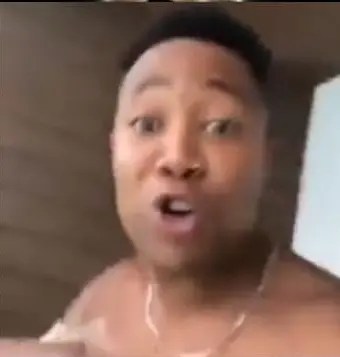 Lesego Nkaiseng aka DJ Speedsta has sparked outrage on social media after a video of him lashing out at Uncle Waffles and Uncle Vinny went viral.

Fast-rising DJ Uncle Waffles and host Uncle Vinny were introduced to the entertainment scene by Riky Rick. He was their mentor before he passed away.

In the video, the infuriated DJ can be heard insulting and blaming Uncle Waffles and Uncle Vinny for Riky Rick’s death.

Dj Speedsta’s video has raised a lot of eyebrows and left many questioning why he was blaming Uncle Vinny and Uncle Waffles for Riky Rick’s death.

Here are some of the reactions;

Marcus Jnr: “I thought Speedsta was a likeable guy, that guy is pinning Rikys situation on Uncle Vinny and Uncle Waffles ffs They are just kids and he’s traumatising them … Speedsta needs to grow tf up”

uGiovanni: “again, why is Speedsta blaming the likes of Vinny & waffles for the passing on of Makhado?”