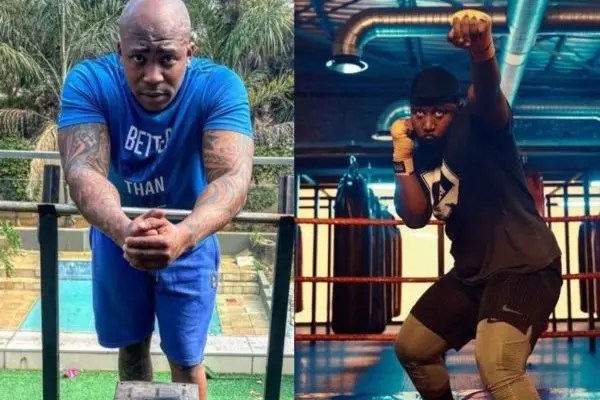 Cassper Nyovest may have ended the night a winner in his Fame vs Clout boxing match, but he’s already planning his next. And this time it’s against another celebrity opponent – Naakmusiq.

And despite the challenge being made on the spot, the date has already been preliminary set. The rival rappers are set to go head to head next year on 8 April at the Superbowl in Sun City.

Following his win against YouTuber Slik Talk, Cassper Nyovest challenged Naakmusiq – real name Anga Makubalo to be his next opponent.

The Good For That rapper was asked who he would like to fight next. Cass revealed that his top three opponents would be Prince Kaybee, AKA and Naakmusiq.

And the actor and musician – who watched the live match ringside – gladly accepted the challenge. Stepping into the ring, Naakmusiq said; “I think that out of the top three he mentioned, he should not have mentioned me last. He should have started with me”.

He also took a swipe at Cass’s boxing skills, adding to the crowd; “Everyone that taught Cassper how to box is going to have to teach him a little more.”

Many tweeps believe that the fight between Cassper and Naakmsiq was planned prior to the Fame vs Clout match.

And one clear indicator was Cassper’s tweet earlier on Wednesday where he claimed that the “main event” would be taking place in April 2022.

Cass tweeted prior to the match: “Put to rest? This ain’t even the main event! The main fight is in April!! This is a teaser! I’m investing in boxing as a sport. We signing & managing boxers next. I am going to put South African boxing on the big stage! We are going to put money in this thing and get it booming!”.

Put to rest? This ain't even the main event ? The main fight is in April!! This is a teaser! I'm investing in boxing as a sport. We signing & managing boxers next. I am going to put South African Boxing on the big stage!!! We going to put money in this thing and get it booming!!! https://t.co/OougVtU4TX

Others claimed the “poor acting” was another dead giveaway.

Cassper and Naak gave us some SmackDown kinda acting, very classic. It was planned even Sol said it #FameVsClout