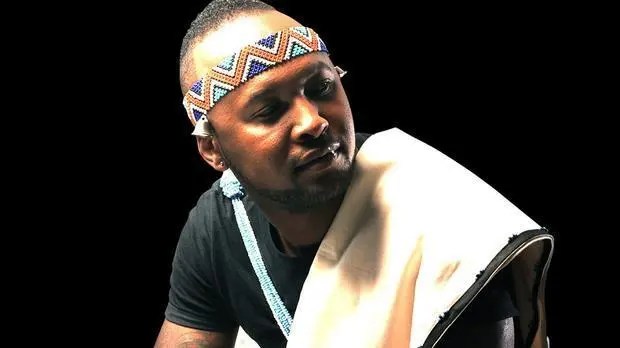 Vusi Nova is probably one of the most trolled celebrities in the country and he has impressive thick skin. Being best friends with Somizi Mhlongo comes with it’s advantages because he has learned from the best!

The star recently made headlines after his cosy pictures with Lasizwe went viral. The two were dressed in white and Vusi was holding his Malibu glass which suggested that they were at a party. Which also raises eyebrows because Lasizwe said they are just bible study buddies. After the pic went viral, many assumed Lasizwe was not comfortable seeing how he looked scared when Vusi wrapped his arms around him.

After trending for days, Vusi said the trolls are witches and they practice witchraft. Vusi posted a TikTok video of him calling out the witches saying he wishes to share something with people but they have evil hearts.
Vusi Nova rarely trends for his amazing voice and hit songs, but trends when people ask about his sexuality, and whether or not he is dating Somizi Mhlongo. Speaking about his love life he said he has been through the most but had dusted himself off.

Vusi has alwasy been involved with Somizi but their 16-year friendship has been put to the test. Vusi spoke highly of him during an interview with Jon Savage on his What’s Your Poison? podcast.

“His success has been motivation for me to believe this is possible. Somizi is living proof that reaching your dreams is possible. It’s not often you find someone you are able to trust with your life and when you do find someone like this, it’s important to nurture that relationship.
People out there are saying that we are dating but we’re not dating. We have mutual respect for each other and we trust each other a lot … With us, it’s realness all the way. It’s been 16 years now and we’re still going strong,” he said.

Somizi always proudly and publicly defended his friend. In December he clapped back at trolls who were invested in their lives.

He furiously tweeted: “I have an ask….to the ppl who are so invested in my love life…..is yo festive that bad that ur so interested in what’s happening between me vusi and mohale….hayi it must be bad shemmmm askies…..how can I help bathong…[email protected]_motaung babe siza tu. @novavusi love help”. We wonder how Somizi feels about this new friendship seeing how he and Vusi are super close and he and Lasizwe had a fall out.