Video: Woman spotted eyeing DJ Zinhle’s Boyfriend – What was she looking at?

Video: Woman spotted eyeing DJ Zinhle’s Boyfriend – What was she looking at? 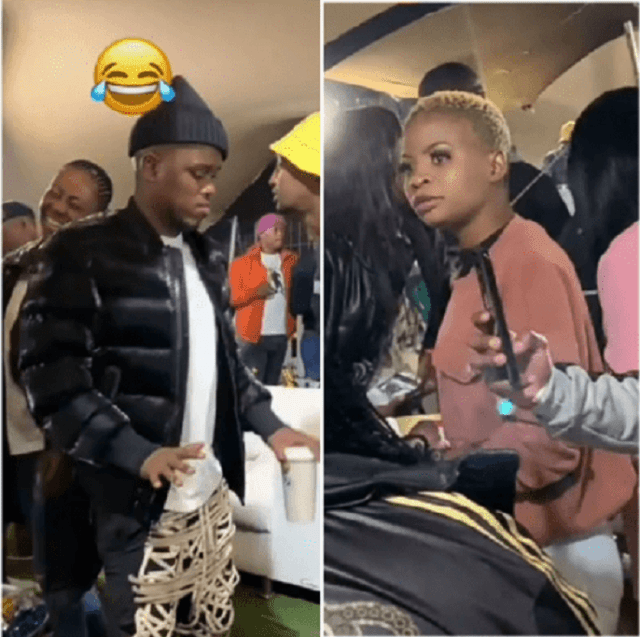 What was she really looking at? Have you ever had the moment when you see a celebrity at a club or an event? Well, that is that, but have you ever seen the look of someone who sees their ex for the first time in years and they realize that they are looking good?

This is how everything looked like here, there is this lady who was looking at DJ Zinhle’s boyfriend, Murda and there is a thing about how she looked at him.

Murda is also one of the two members of the prolific musical duo, Black Motion, a lot of ladies probably look at him a lot. Now, there is really something interesting here, as soon as the lady laid her eyes on Murda, she kind of jammed for a moment.

But then, the camera shifted to see what she was looking at and there he was, Murda was seen dancing, but it is not just that, he had some ‘weird-looking’ pants on.

Murda was wearing some pants with ropes on the front, some people call the pants the ropey pants. So, it could be that she was staring at the pants, she was probably confused about the whole look, if that was the case, then she clearly has not seen anything.

When it comes to fashion, Murda is very stylish, he knows how to dress if he is the one who chooses what to wear.

He has probably started a trend with those pants, there will probably be a few more people who will wear the pants.

But, how sure can we be that she was staring at the pants? Maybe, it was not even about the pants, maybe she was surprised that Murda was right there with them, dancing and having fun like everyone else.

As the lady was staring at Murda, one of her friends came close to her and said something as she was also looking at the DJ.

There was definitely something that caught their attention, big time, if only we could know just what that is.