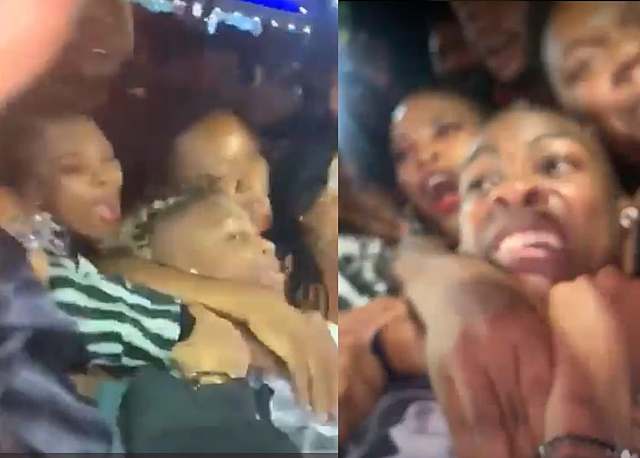 No doubt he got the bling and plug. Who doesn’t want to see Uncle Vinny doing his crazy dances on stage though? A few weeks ago he found himself trending after his birthday saw SAPS coming in to shut down the function.

Well, we can all agree that he has become one of the most followed star celebrities in Mzansi. However last night he escaped death by a whisker after some crazy fans tossed him around whilst some holding him by the neck in an unfortunate incident.

Sensation Uncle Vinny was almost killed last night by fans after he was pulled into the crowd while performing. The crowd of ecstatic fans could not withhold their joy and could be seen tugging on Uncle Vinny as he performed his famous dance.

One fan can be seen chock holding Uncle Vinny and holding him by the neck. A move was synonymous with wrestling.

Kabelo Vincent Ndlovu is a 19-year-old MTV Base VJ and social media sensation people can’t get enough of. From his signature dance moves to Amapiano songs, that immediately go viral and are copied by other performers; featuring on music videos of artists like Riky Rick and Major League DJs, he has charted his own way in the entertainment industry.

A former presenter on Hillbrow Radio Station, Vinny creates event concepts and hosts these events, which leads to him meeting people who will, as the kids say, “put him on”. A content creator, he has managed to build his brand around being a good time guy, and party starter, which has allowed him to garner a massive fan base that now eats out the palms of his hands.

He attended the National School of the Arts, which helped him realize that he needed to quickly find his lane in the arts.

His TikTok channel boasts more than 57 000 followers, with his content receiving more than 150 000 views. His dance moves are so popular, musicians want to collaborate with him so they reach the all-important Gen Z market.

However, it was recently revealed that Uncle Vinny at the age of 15 was already a breadwinner. We can all agree to the fact that fortune favours the bold and Uncle Vinny’s success can attest to that.