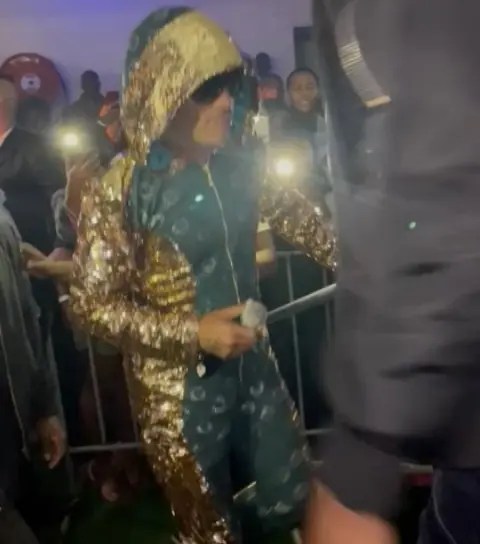 Som Som always finds ways to add some bit of humor into his life and his fans are happy he brightens our days on a daily basis.

Entertainer Somizi has once again proved that he can come up with a plan when needed. The flamboyant Somgaga recently came up with his ultra-impressive plan to not get affected by load shedding which is currently being the daily norm for South Africans as the power utility Eskom struggles to keep with electricity generation.

The star was in Empangeni over the weekend and his outfit left fans star-struck as it reflected light all over the stage. Before the appearance, Somizi even posted on Instagram on how no load shedding would dim his light.

He wrote : “Im my element… About to hit the stage. No loadshedding can steal my light No evil can dim my shine. Golden Boy”

The one-piece suit was covered from head to toe in golden sequins that reflected light in every direction.

In another video, he takes to the stage and the crowd goes completely wild. Somizi load shedding outfit was surely a people pleaser as visualized in the video below. Somizi seems to be taking his new lifestyle in his stride after the divorce and abuse allegations made by Mohale led to his dismissal from Metro Fm and IdolsSA.