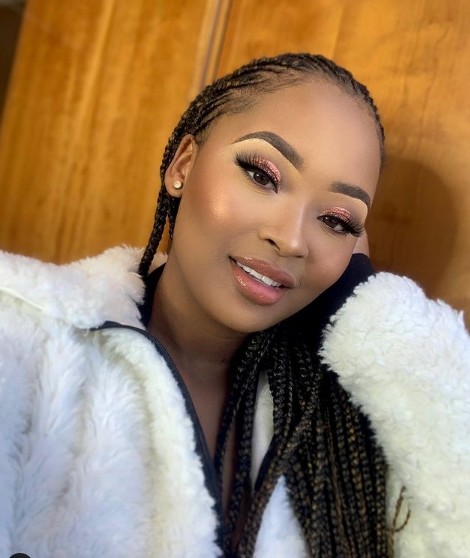 YouTuber, Instagram influencer and make-up artist Cyan Boujee has once again made it to the trends list after her friend accused her of leaving her following an accident they had

Karabo who is known as Madam Spura on socials took to her YouTube channel to narrate the events that transpired on that faithful day that almost claimed her life.

Karabo is currently on a gap year and as such babysits her little sister because she has time to. That day she said her best friend Cyan called her and asked her to accompany her to Phalaborwa for a paying gig, influencer things.

Karabo had to cook up some lies to convince her granny to babysit her little sister for her so that she can go with Cyan. That almost did not happen because everyone kept telling her to just wait until they came back home. Sis would not have it, she wanted to leave and she eventually did.

When they stopped at a garage to get snacks for the road, Karabo said, “A cat came out of nowhere. A cat stood in front of the car…where does a cart come from while at the garage. The cat looked at us…it was so creepy but we laughed about it…when you see a cat, it’s warning you that something bad is gonna happen or a cat is witchcraft…”

Karabo said everything was nice, she had an amazing time. They then got to Tzaneen around 5pm. They made a stop at another garage to pour petrol. Karabo said her friend would occasionally check the clock and say they are about 30-20 minutes away from where they were going. Karabo added that the roads in Tzaneen are scary and she was scared for a while.

Cyan then said, “Chommie you trust me with your life ne” and she casually said she does because she has been in Cyan’s car before and knows how she drives.
Karabo says Cyan was telling her about her boyfriend and how he did not respond to her message then there was some bumpy things happening and she immediately put her phone down and apologised.

“Guys I swear the last thing that I remembered was being at the garage. the rest akitsi…I did not feel being in an accident. That was like so weird and guys I wasn’t sleeping…guys I did not feel anything. I did not even know that I was involved in an accident until I woke in hospital asking what am I doing here because nna the last time i was in a car going to Phalaborwa”

Karabo says she does not remember anything about the accident and she did not see the accident take place. She is worried and wondering why she cannot remember the accident. “They say we rolled 7 feet down a bridge and then i was stuck in the car…when I ask moghel what happened…she cant explain properly. Moghel is like, chommie the steering wheel jammed and then we rolled”

Karabo says Cyan said she got out of the car and then went to look for help, “she climbed up and she took an hour to go up and search for help…apparently she got out kaSunroof…”

Cyan is said to have left the accident scene and proceeded to the event they were going to, leaving her friend fighting for her life. When Cyan got to the event she was posting bev pictures for content obviously but she was tagging her friend Karabo as though they were at that event together.

Now people on Twitter are convinced that she was trying to sacrifice her friend because she made it out of that accident without a scratch and then one of her captions was, “there’s always going to be something to celebrate”.

This made people wonder what she was celebrating when she just had an accident. Was she not traumatised? Or that she was simply celebrating her friend’s death.

Other people came to Cyan’s defence and said that Cyan was advised by her management team not to post anything relating to the accident.

People are now questioning a whole lot of things including that Cyan has faked a pregnancy in the past and bought herself presents on Valentine’s Day and made it seem like her ‘boyfriend’ bought the gifts for her.

Cyan has responded to these allegations and said that she would never do that to a person she considered a best friend after everything she has done for Karabo.

This what Cyan said:

Cyan Boujee takes to IG Live to detail her side of the story with regards to the accident.

Cyan Boujee addresses the allegations made by Madam Spura.