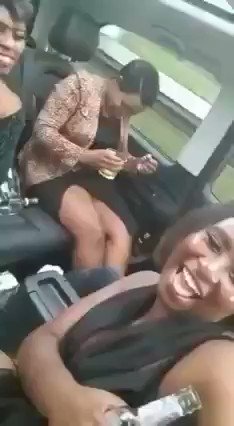 A month go he made history when he became the first Zimbabwean to be appointed as the Mayor of Joburg. Barely a few weeks into office the ANC big wig died in a tragic accident.

In the wake of his death, he is trending. A viral video has emerged of the late Joburg Mayor Jolidee Matogo living his best life with three slay queens inside one of his cars.

In the video which has gone viral, the late Mayor, clad in ANC regalia is seen dancing to Shimza’s Khethiwe. A cooler box full of alcohol can be seen in their midst. However little is known about where and when was the video taken.

A few weeks ago the Mayor who was travelling with his two bodyguards, was certified dead at the accident scene along the Golden Highway near Lenasia South, less than 5km from his home.

However, it was reported that Matongo’s vehicle collided with an oncoming car. It was established that it rammed the NP 200 after trying to avoid hitting an unidentified pedestrian who “ran onto the road”, according to a police accident report.

“The driver of the BMW [X5] tried to avoid the pedestrian and collided with a silver Nissan NP 200,” the report stated.

However, the driver of the bakkie died at Chris Hani Baragwanath Hospital in Soweto after succumbing to his injuries while Matongo’s protectors were airlifted to Milpark Hospital from the scene.

Matongo’s close friend and spokesman for the family, Muzikayise Ndlovu, said Matongo was being driven to his home where he was going to refresh and prepare for a trip to KwaZulu-Natal for a family ceremony.

“He [Matongo] had actually finished doing work for the ANC and was coming here to change so that he could take a trip to KZN as we were preparing for other festivities and ceremonies of the family,” Ndlovu said.

“Those who knew Jolidee know that he was a genuine, down-to-earth and selfless person. As a friend he was one of those people I could confide in and I knew that if I had a problem about anything I could go to him and he would give me sound advice,” Ndlovu said.