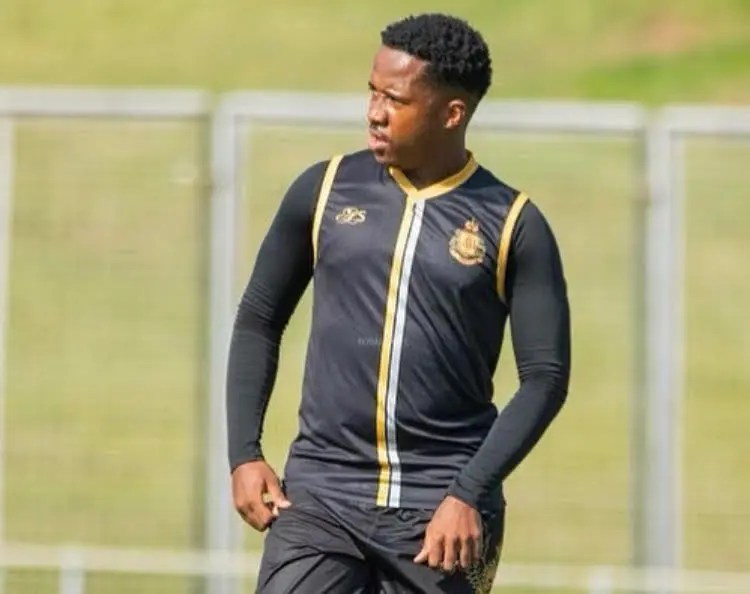 The musician-cum footballer was donning the famous number 10 shirt and looked to get himself in the playing rhythm to take part in the match.

Royal AM was no match for the well-oiled Mamelodi Sundowns. The star of the game was Rivaldo Sofala from the winning team. He was awarded a 220G loaded DStv internet router for his efforts.

Masandawana took all three points in the six-goal thriller at Princess Magogo Stadium. The first goal came within two minutes of play with Sundowns’ Karabelo Ramokepa finding Ndzalama Mhangwana with a perfectly timed cross, who headed home to give his team a perfect start.

Six minutes later, Sundowns’ Ramokepa delivered a corner and found Thato Matli, who headed the ball before id deflected off a Royal AM defender to hand his team a two-goal margin.

Christopher Mbhele added Sundowns’ third in the eighteenth minute, and Sundowns was in control of the match.

Four minutes later, Royal AM’s Xolani Phewa pulled one back, and the Durban-based club looked to push for a comeback in the first half.

Philani Khumalo scored the second at the half-hour mark with a spectacular freekick to raise the hopes of the Shauwn Mkhize owned side. The hopes further increased as Sundowns were reduced to ten men, with Christopher Mbhele receiving a yellow card an awful challenge on a Royal AM player.

Perhaps Andile hoped to come on as a substitution when his team was leading by a margin, but it was not to be. The flamboyant businessman remained on the bench for the rest of the match.

Andile’s warm-up video was not impressive, and he never looked ready to participate in the match. Watch it below: