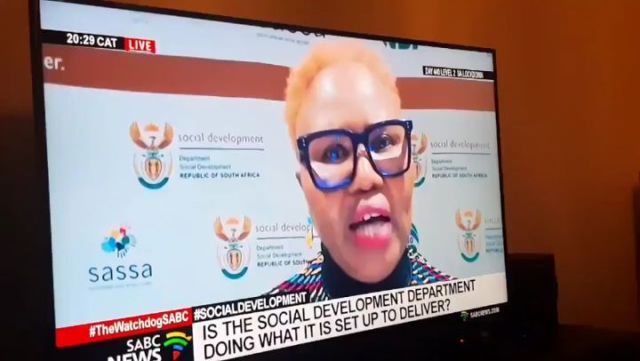 The video shows an incident where Lindiwe Sisulu was giving an interview at SABC news and she was describing everything that she had to and answering all these questions, but all of a sudden load-shedding hit her area causing the lights to go off and the screen went completely dark.

This forced the news team at eNCA to shift the Focus to the anchor and he was caught speechless without knowing what was the next step that he was supposed to do, all the while Lindiwe Sisulu was still on and she said “oh no” as if she had been anticipating that load shedding was only around the corner and it could have hit at any time.

Many people in this country are just glad that we are not the only ones who are going through this load shedding period where we find the electricity going away at any point in time, it has been revealed that we are going to move to – if not already have moved to the stage 4 of load shedding.

The stage where we will see a lot of power cuts and these are going to have bad consequences to businesses that are being run, because they will force most of them to close up early or to even compromise their stock if they deal specifically in a lot of refrigerated goods.

Load shedding has been the bane of contention to many South African citizen since it started and it is revealed that in recent years it has been a lot more severe than it was back in the days, now we’re even having a schedule of load-shedding which is something that is very new to many countries and it’s something that is not supposed to be happening.

The economy of the country depends on the efficient running of and delivery of power to households as well as businesses, so if we constantly have this problem this constitute economic Sabotage despite the relevant authorities such as Eskom.