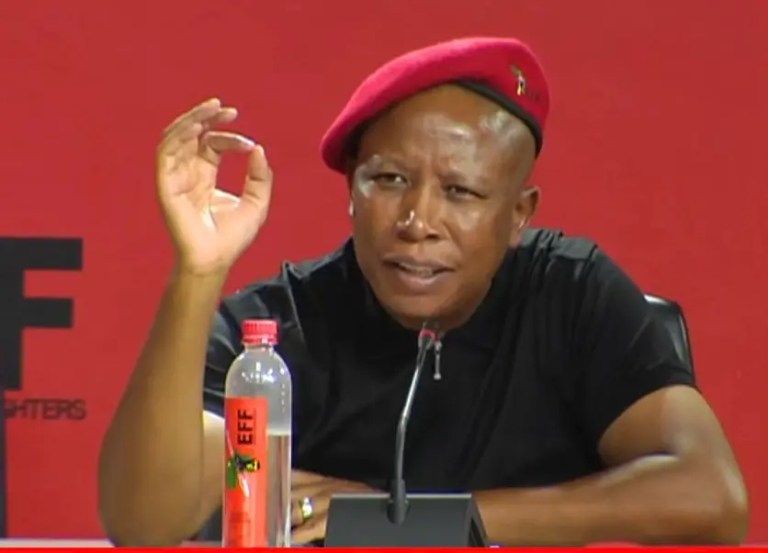 It seems relationships are becoming strained as political leaders try to court each other in the race to form coalitions after the local government elections.

Kunene was a member of the Economic Freedom Fighters (EFF) when it formed in 2013. He acted as the party’s head of campaigns, mobilization, and special projects, but resigned in August that year.

Since then, Kunene and EFF leader Julius Malema have had a few public squabbles.

“I founded the EFF… One of the reason that I left the EFF is exactly what is happening now in the EFF: The lies, the facade that is being put to the people of SA and the world that this is a revolutionary movement and that their leader is revolutionary man whereas he is the biggest liar,” Kunene said during an interview on Morning Live.

Their falling-out was fired up again on Tuesday as the deadline looms for political parties to form coalitions in hung municipalities. Kunene is the deputy president of the Patriotic Alliance (PA), the party that emerged as coalition kingmakers during the local government elections.

Negotiations between the EFF and PA seemed to stall, however, and on Tuesday, Malema said he was ‘conflicted’ about working with mapantiti (convicts). Kunene and McKenzie have both spent time in prison.

Malema on Gayton and Kenny. 😂 pic.twitter.com/8ClSJkCYZj

The row then escalated on Wednesday when Kunene called Malema a cockroach during a live interview on eNCA.

“I am going to deal with him. He must tell me I am a crook to my face. I will call the media and address these issues publicly, and tell them why I really decided to leave the EFF. We just have to conclude our coalitions, help form governments, then I will deal with this little cockroach called Julius Malema.”

@Ruraltarain Kenny Kunene is promising to deal with the 🪳… it's lit. pic.twitter.com/HYAkpY0Eoq

The feud lit up timelines on Twitter as well. This is what some had to say on the matter:

I have a feeling that Kenny Kunene has got some dirty files on Julius Malema. 😂

Malema has met birds of a feather in Kenny Kunene and Gayton.They are as brainless and ignorantly verbose as he is. Let the pigs dirty each other. 🤣🤣🤣🤣🤣🤣🤣

Kenny Kunene must learn that you don't take everything personal in politics. Imagine if all politicians were to get angry over everything that is being said about them. pic.twitter.com/5IsVatOhYt

Kenny Kunene is angry😂😂😂😂. He wants to fight Malema physically…there's nothing he knows about Malema that he has not spoken out yet. He's just going to waste everyone's time. This pantiti must just focus on eating sushi off naked women's bodies. Politics is not for sissies pic.twitter.com/Inn7bqCQ02

They can call us criminals, yes we did commit crimes 3 decades ago, we went to jail, we paid for our crimes, we share our riches because we know what it is not to have, we gave 17 000 food parcels during lockdown. Salute 👊🏿 pic.twitter.com/9kHfxWQnnF

They can call us criminals, yes we did commit crimes 3 decades ago, we went to jail, we paid for our crimes, we share our riches because we know what it is not to have, we gave 17 000 food parcels during lockdown. Salute 👊🏿 pic.twitter.com/9kHfxWQnnF