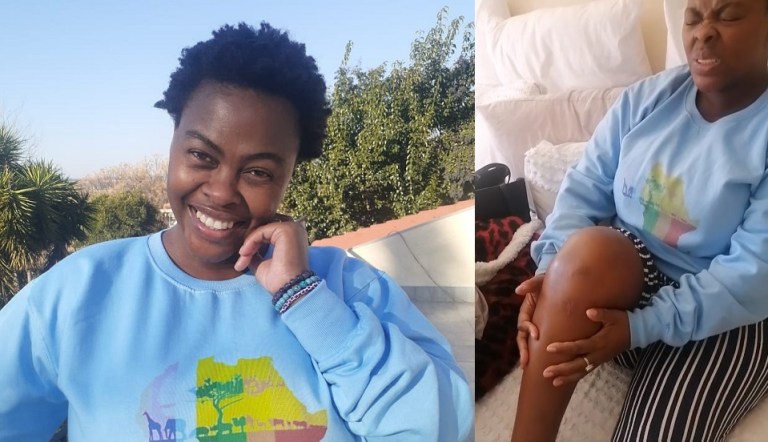 Dawn Thandeka has taken to her social media to share her journey as she heals. The star shared that she had an accident in April and it has been her worst nightmare. The actress stated she had the accident while she was doing something she loves doing more.

“On the 16th of April 2021 while doing something that I love doing more than anything else in the world, a terrible accident happened.”

Well, Dawn has taken to her Instagram to share a video of herself struggling to bend her knee.

She stated that she has never felt pain before as she can pick giving natural birth again than bending her knees every day.

Dawn said: “So the physio gave me some exercises to do, to get the knee to be flexible again, these are meant to strengthen the muscles around the knee, and get it to be straight, and for it to bend again. Hhayi Shemmm, I have felt pain before, but the pain of bending a knee that hasn’t worked properly for 3 months, Hhayi Shem, I’d rather give natural birth again, at least there, you push once and you are done, but this, I have to do everyday until the knee works again.. Weeeeehhhhhh!!!!! Shembe!!!! 🙆🏿‍♀️🙆🏿‍♀️🙆🏿‍♀️🙆🏿‍♀️ On a positive note, I am grateful that I can bend it as far as I can on the video, because it couldn’t bend at all 😭😭😭I am grateful for this improvement”