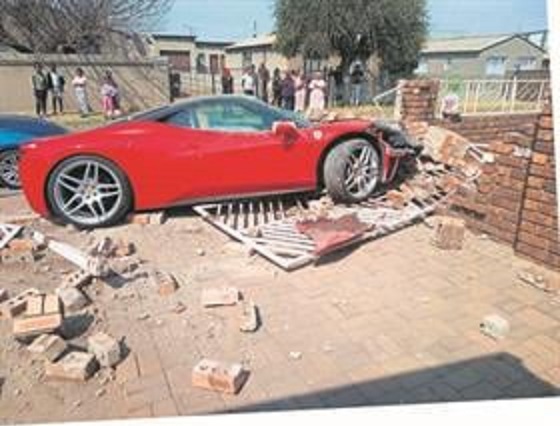 Gogo Pulane has often had cars drive through her fence onto her property. But according to the gogo, this time the driver was sober, and . . .

It’s not every day you hear a crash and find a red Ferrari worth R3 million in your yard!

Pulane Mpiyane (60) from Wattville in Benoni, Ekurhuleni told the publication that just about every two years somebody crashes into her yard, leaving them fearing for their lives.

But on Wednesday, the car that crashed into her yard was a 2011 Ferrari 458 Italia.

Mngani can take your New machine for a spin ahh yeah ofcos… Then this 😭#PSLogo#clicks#JusticeForNosicelo#ladyzamar pic.twitter.com/uxXMUarzSi

“Most of the time the drivers are drunk, but the one in the red car was not drunk. There have been many accidents here because it’s a T-junction,” said the surprised gogo.

She said the family felt there was a dark cloud hanging over them as their wall has been hit several times.

“The driver told us that he was swerving to avoid the children running in the street, so he decided to hit the fence,” she said.

She said the driver promised that he’d come and fix the damaged fence.

“He wanted to give us money, but we asked that he fix the fence and not give us any money.”

She said after the incident, there were no injuries, but a 10 -year-old child in the car was in shock.

“I gave the child starch water and comforted him.” She said they have requested speed humps through petitions over the past few years.

Neighbour Winnie Seakgoe, whose wall was also hit, allegedly by the speeding Ferrari, said they heard a loud sound and rushed outside.

“When we went to look, the wall was down and half of the car was in the yard.”

She said they were worried as they sometimes have to wait outside their gates for their children coming back from school. “Most of the time drivers don’t stop at the stop sign.”

Another resident (59) said they put up their own speed humps. He said they’ve signed several petitions, but nothing has happened.

Ekurhuleni municipal spokesman Zweli Dlamini said: “We’ll see how far the petition has gone, because we’ve got a process that deals with petitions.

“We also have a process that deals with speed humps. We’re also going to inspect the area and see if it needs urgent intervention or not.”

He said it was unfortunate that cars crashed into walls, but promised that the issue would receive their urgent attention.