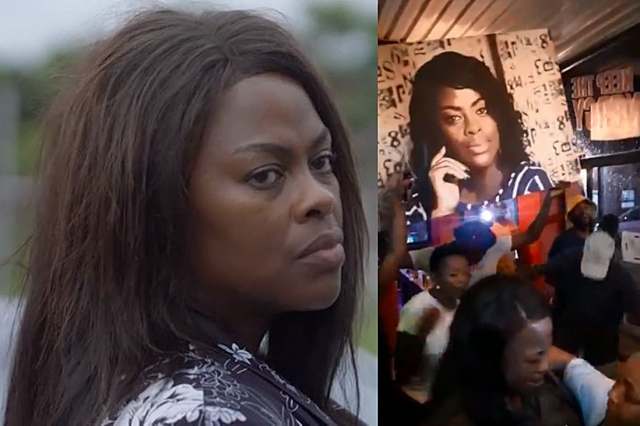 As the last episode for “head honcho and king pin of KwaMashu MaNgcobo” nears, the actress behind the beloved character Dawn Thandeka King has taken to her Instagram to bid a bittersweet goodbye.

Dawn posted a video in which her followers saw her wipe away tears as cast, crew and friends sing and chant a song for the legendary character she played on Uzalo for seven years.

Dawn expressed her gratitude over being able to play the well-loved character and admitted she would also miss MaNgcobo.

“End of an amazing Era. Thank you Stained Glass TV and SABC1 for everything. I will miss MaNgcobo and I will miss everyone who opened their hearts to me. It’s been a beautiful journey. Till we meet again,” she said.

In a statement sent to the publication earlier this year, the production house behind the popular soapie confirmed some of the big names they would be saying the “inevitable bittersweet goodbye” to.

Stained Glass TV said they were honoured to have worked with some of the most talented actors in SA and continued to have the utmost respect for them and their craft.

Going into the new season, Uzalo fans also said goodbye to Qhabanga played by the esteemed Siyabonga Shibe and the judicious and unwavering lawman Captain Mpambani played by Jet Novuka.
“We are incredibly fortunate to have worked with such a remarkable host of actors. We thank Siyabonga Shibe, Dawn Thandeka King and Jet Novuka for the great work they produced as part of the Uzalo family. We wish them all the best in their future endeavours,” added executive producer Mmamitse Thibedi.
Watch the video below: