#Uyajola99: Cheating MaZulu Says She Loves Both Her Men Equally

#Uyajola99: Cheating MaZulu Says She Loves Both Her Men Equally 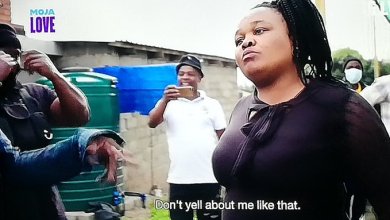 Another Sunday means yet another exciting episode of UyaJola 9/9, Jub Jub and his crew takes on South Africa as they attend to the complaints brought to their attention by a person who is worried about how her partner is behaving and it happens to be because the person is having an affair.

Mzwandele from KwaZulu-Natal wrote to the show because he saw other people getting helped and he felt maybe if he does write, he can get help to get to the bottom of the mystery he has been trying to solve about his woman MaZulu.

“I have been with this person for about four years, and for the past couple of months there has been weird things happening, there are calls. that comes in at night when we are sleeping, I found some smses I don’t understand. I love her and I want this thing to work.

“I want to find out if she is indeed cheating and perhaps get the reasons for her cheating,” he said.

Mzwandile also confessed to Jub Jub that he has cheated on his woman once and they then worked on their Issues and managed to get past it.

When they went for confrontation, they found MaZulu seating comfortably at a Car Wash, and she did not show any remorse, instead, she revealed that Mzwandile is also cheating, before he could get to her, her side niggar was already on him, and he pushed him away.

“Stay away from my man, stop that, you are also cheating, this is my man, he is mine as well, he is a cheat and full of nonsense. I love him, but I also love this one too, I wanted to show him that I can also get a man if I want to,” the cheaky MaZulu said.

After making a choice that the other man is also her man, MaZulu refused to be left behind and demanded to come along with her man Mzwandile, she insisted that she is not staying behind.

“I am going with him, he is my man, I am not staying here, this man has already ruined my thing with that guy, this one is my man, that one is my man too, they are both my men. Stop man, you dog, hey driver, let’s hit the road, you’ve embarrassed me.

The other guy wanted to know if she is really leaving him behind, she just told him where to get off and told him that he must stay out of it and they will talk over the phone.

“Yes, I am leaving with my man, I’ll call you, we will talk over the phone,” she told her side niggar.