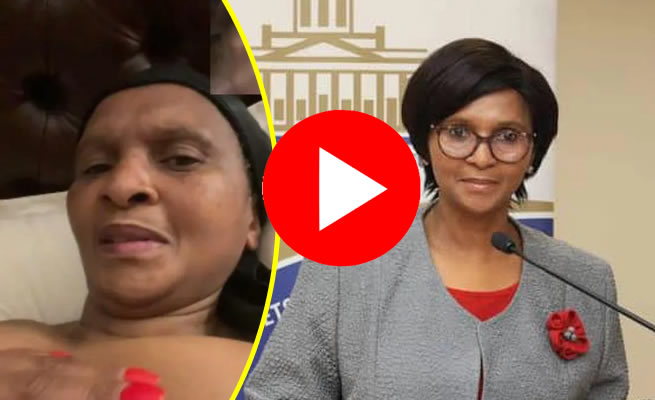 The speaker of the Free State legislature, Zanele Sifuba, desperately sought money from her ANC comrades before her tlof tlof video was circulated on social media this week.

Sunday World reported that before the release of the video, Sifuba asked colleagues for large amounts of money, but did not disclose what she wanted it for.

“Zanele approached many politicians for money, however, she never specified what the money was for.

“She only told us that she needed money urgently, but we couldn’t understand the urgency. She was in a state of panic…,” said one of the top ANC politicians in the province.

“She looked depressed and she told us she needed money fast. We told her that we didn’t have any problem giving her money, but we needed to know what the problem was. She never provided any details. She requested to be lent hundreds of thousands of rand but disappeared after realising that she was not getting the money,” said a source privy to the situation.

The matter is further compounded by the fact that Sifuba allegedly steadfastly refuses to disclose the identity of the alleged extortionist – both to the police and her colleagues.

The man responsible for the alleged extortion is believed to be a Nigerian, who is known to target top ANC women politicians and socialites.

The man is said to have tried “the same trick” on a senior SABC news anchor in Bloemfontein, Free State.

However, the SABC employee refused to pay, despite the blackmail.

It is, however, believed another top ANC woman politician made a payment of about R1-million after she was also blackmailed.

This, however, could not be independently verified, although it is subject to public discussion in the province.

Senior police sources in the South African Police Service in the Free State told Sunday World the police were making progress in their investigation, though “she has refused to disclose the name of the suspect”.

“Zanele has told the police that she knows the person who filmed her, and she is not ready to reveal his name. She told the police the incident happened more than two months ago,” said an insider within the provincial police.

It is not known why she is reluctant to disclose the name, although she has provided two of the man’s mobile numbers. One of the cellphone numbers has, however, been traced to a Limpopo woman.

Sifuba declined to speak to this reporter, asking to be given some space.

Mangaung police spokesperson Lt-col Thabo Covane said “a case of extortion was opened at Bayswater police station on 12 October 2022 by the 53-yearold female, who is the speaker of the provincial legislature.

“This office can confirm that the investigation in the case is continuing. No suspect has been arrested yet.”

The SABC employee and the top politician who is alleged to have paid money to the extortionist could not be reached for comment.