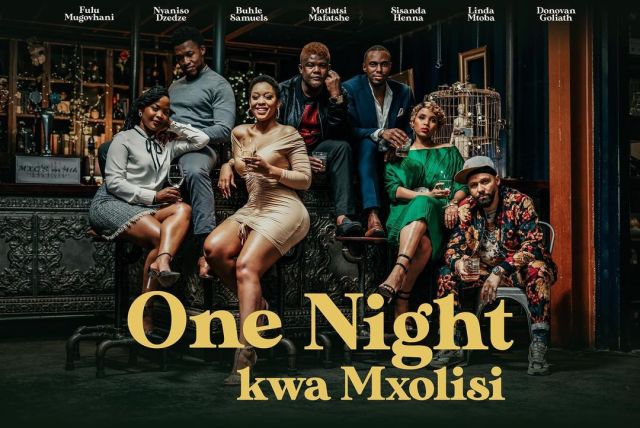 “Linda Mtoba, Buhle Samuels, Nyaniso Dzedze & Motlatsi Mafatshe They all star in a new film directed by Sisanda Henna titled “One Night Kwa Mxolisi” The film will premiere of Showmax this month.”

Buhle Samuel’s seems to be busier than ever before since she exited Muvhango last year. There were reports that the actress resigned from the show before getting the boot from the show’s producers for apparently being a diva.

She joined the show in 2018 where she played the role of Matshidiso for about four years and exited the show to explore other avenues of her career such her partnerships and lingerie brand and making movies.

This is where I started and learnt almost everything I know. I have learnt so much, but I had to be honest with myself and realise I have done my part. I want to explore other things. It is scary but I will be on one or two other projects in the coming months and it will allow me the time to work on my music.”

“This is my year I am taking over everything that’s mine with God on my side. I can’t even tell but watch and see as Buhle Samuels flies high. They say the sky is the limit. I say I want it all the ocean and the sky. It’s my time and it’s my year.”

Before joining One Night Kwa Mxolisi ,the actress played the role of Angela Masire in Netflix’s Kings Of Joburg.

Here are some reactions from fans regarding the film:

“Buhle Samuel’s seems to be busy, this is definitely her year Hopefully it will help Nyaniso Dzedze reassert himself, the role he is playing on Generations is a bit too low for an actor of his calibre – my own view.”

“Lol i dont know how the movie will be but 1 thing i can tell you is that Motlatsi Mafatshe will be the blesser and that 1 wa di six pack will be an instagram model ka apartment ya mattress le GTI.”

“Nyanjso Dzedze is a great talent happy to see him flourish with the likes of Black is King,Generations now this.”

“Been waiting on Linda Mtoba to awaken that Denzel he’s always teasing…. Quit sleeping on yourself famo.”