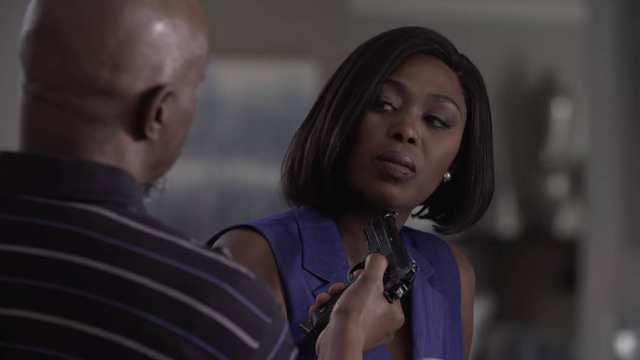 It’s been several months since award-winning actress, Brenda Ngxoli joined the cast of The Queen and fans are still expressing their dislike for current role on the show.

When she took the role of Noma on The Queen nobody expected that the actress would receive so much hate for her character because she’s never disappointed fans on any other show before. Her fans have stated that this is probably the worst character she’s ever played.

Here are some tweets regarding her current role:

“Brenda Ngxoli is such a brilliant actress; remember her on Home Affairs as Vuyokazi Ngxaki? She’s so wasted on this the Queen role she’s playing.”

“Brenda Ngxoli’s acting on that show is so awful.”

“Brenda Ngxoli is a star actor but the queen is using her abilities like shit.”

“The Fergusons must be stopped, Brenda Ngxoli is too good to be doing this.”

She’s not the only actress who is receiving backlash for her current role though as tweeps have also expressed their disappointment with Jessica’s Nkosi’s character, Thando Sebata. While fans loved Nkosi as Queen Qondi in Isibaya, they completely dislike her role on The Queen too.

The Fergusons are destroying Brenda Ngxoli and Jessica's acting careers. I fail to understand the characters they are playing ku The Queen. Brenda was best ku The River, hayi lomsangano awenza apha we twang #TheQueenMzansi

The actress worked with The Fergusons before on Rockvill and won her first SAFTA for that role. While we understand that the actress might feel like she owes her first SAFTA to Ferguson Films because they played a huge role in her career.

Fans feel that she shouldn’t have taken the role or might not have agreed to be so unauthentic. The role isn’t really paying off for her or the show at the moment.

It’s not just the thwang English she speaks that’s unappreciated but that she looks uncomfortable and makes the fans cringe.

It’s feels like this is her first role ever!

Surely actors are allowed to make suggestions to their roles right? Not everyone can turn down a role because roles don’t just fall from heaven like Manna, but please improvise…

The actress was even nominated for an Emmy award for her role as Vuyo on Home affairs. She’s been on Ses Topla, Rockville and iThemba, and many more shows, where audiences couldn’t get enough of her.

This isn’t her first novella though as she also played Dambisa Dikana on The River, where she was also loved and appreciated.