Teacher by profession Bheki Cele in hot soup, he got fired as police boss over controversial deal

Teacher by profession Bheki Cele in hot soup, he got fired as police boss over controversial deal 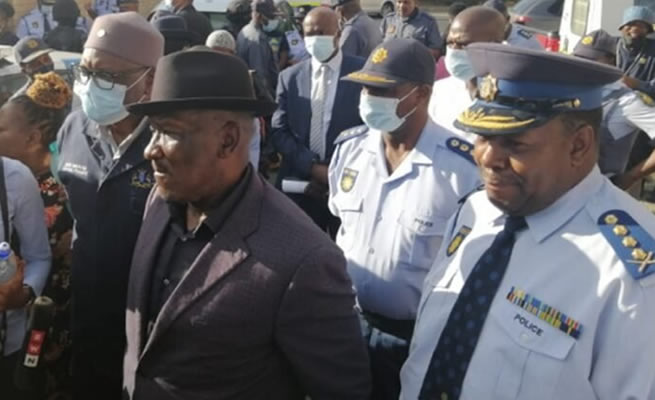 The head of the investigating directorate of the National Prosecuting Authority (NPA) has asked the Hawks to reinvestigate the controversial rental deal involving their political boss, Police Minister Bheki Cele.

The case against Cele, which stems from his attempts more than 10 years ago to rent a building in Pretoria that would serve as the new police headquarters, without following tender procedures, is one of those explored by journalist Jacques Pauw in his new book, Our Poisoned Land: Living in the Shadows of Zuma’s Keepers.

Bheki Cele’s highest academic qualification is a teaching Diploma. With his teaching diploma, Bheki Cele has been holding top job positions in the police service for a very long period of time. Currently, he is serving as the Minister of Police.

In 2009, the then Public Protector Thuli Madonsela, in her investigation into the rental transaction at the time, found that rules had been broken and that the case against Cele should be further investigated with a view to pressing criminal charges.

Although the findings and recommendations of the Public Protector are binding, nothing came of that investigation, primarily because important evidence disappeared from the file. Cele also never lodged an application in court to have the findings set aside.

The case was brought to the NPA’s attention in 2020 by Advocate Paul Hoffman, director of the organisation Accountability Now.

What Pauw does not mention in his book is that Hoffman, after not hearing from the investigating directorate, recently wrote to the head of the Special Investigating Unit, Advocate Andrea Johnson, enquiring about how the case against Bheki Cele was progressing.

In September, Johnson replied that her office had confirmed a previous finding by the specialised court for commercial crime that more investigative work was needed in the case.

She added that the directorate for priority crime investigations, also known as the Hawks, therefore needed to probe the case further to determine whether there was enough new evidence for a successful prosecution by her office.

Given the facts that had been highlighted, the investigating directorate was also of the opinion that the Hawks should investigate the case further and resubmit their findings to the Specialised Commercial Crime Unit to determine whether new evidence had come to light, the letter to Hoffman read.

Hoffman told City Press’ sister publication Rapport on Friday that he could not believe Johnson’s response.

“You’re mistaken if you think the Hawks are going to investigate their own minister to a point that could eventually lead to prosecution,” he said.

The pending case against Cele is just one of many instances of corruption that Pauw exposes in his book.

The work is a follow-up to The President’s Keepers, which deals with corruption in the Zuma years and holds the record for the fastest-selling book in the history of South African publishing Released in 2017, it has sold 210 000 copies to date. Free PDF copies of the book were also made freely available immediately after it was published.

Mazzotti is the owner of cigarette manufacturer Carnilinx, a company that Pauw linked to several corrupt acts in his previous book. Now Pauw writes that Mazzotti plays an important role in financing Malema and his EFF friends’ extravagant lifestyles.

Much of the information about Mazzotti’s relationship with the EFF came from a Zimbabwean woman who worked for the cigarette boss for a long time.

Although she was willing to be identified, Pauw decided against it for her own safety, referring to her only as “Margaret”.

Among other things, Margaret told him about parties held by Malema and the rest of the EFF leadership in Mazzotti’s apartment in the upmarket Raphael Hotel in Sandton, Johannesburg.

In an affidavit, she stated: “These parties usually took place on Friday nights and [the guests] also slept in the flat. Their bodyguards/drivers arrived at the apartment with loads of alcohol. There was Castle Light beer, Savanna cider, Johnnie Walker Black Label and numerous bottles of Moët Champagne.

“The champagne was in boxes of six. The bodyguards would drop Malema and his friends at the apartment, together with the alcohol. After that, the bodyguards went to collect girls and women. I was told to go. I know Malema’s wife and she wasn’t one of them. Malema would say to his bodyguard that ‘the auntie must go’. That was a reference to me.”

Pauw writes that these parties in Mazzotti’s apartment continued until Margaret left in 2018. She first arrived at the apartment in October 2016 to clean.

The apartment, she said, was always in a mess. There were condoms in the toilet and also “the remains of white powder on a DVD cassette. There was a roll of money next to the cassette.”

She asked Bright Kumwembe, Mazzotti’s Malawian chef, what the powder was. He said it was cocaine.

EFF spokesperson Sinawo Tambo told News24 yesterday that Pauw’s allegations were “not worth the paper they were written on”.

He added that the party knew Pauw had constructed a history of lies.

Tambo said: “The new book is just another way for him to revive his career and we don’t think there’s any substance to the story”

Sindisiwe Seboka, spokesperson for the investigating directorate, indicated that the case involving Cele was with the Hawks and that they could not comment further.

By the time of going to press, the Hawks had not responded to enquiries about whether they were investigating the case.

Bheki Cele, who was appointed police commissioner in 2009, was fired in 2012 amid allegations that the proper processes were not followed in a matter regarding a lease agreement. He was accused of allowing the illegal agreement of R1.7 billion for police stations in Pretoria and Durban with Pretoria businessperson Roux Shabangu.

Madonsela found that he had not followed the prescribed processes.

After being fired as police commissioner, Cele became the deputy minister of agriculture and was later appointed minister of police in President Cyril Ramaphosa’s Cabinet.

In April 2019, the Pretoria High Court overturned the decision to dismiss Cele as national police commissioner after he had waged a year-long legal battle to clear his name. However, Pauw claims that Cele was unable to do so because he never disputed Madonsela’s findings.