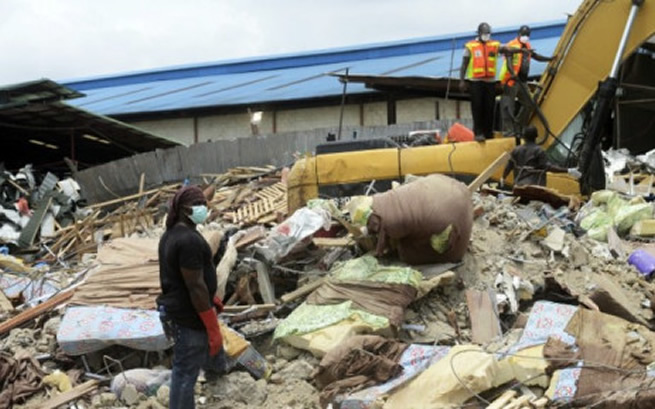 The families of those who lost relatives during a 2014 building collapse at TB Joshua’s church still want answers and justice.

Seven years later and the families of those who lost relatives during a building collapse at TB Joshua’s church still want answers and justice.

The Nigerian televangelist died on Saturday at the age of 57. He founded the Synagogue Church of All Nations (SCOAN), which made headlines in 2014 after a massive structural collapse in Lagos killed over 100 congregants, including more than 80 South Africans. Many of these families said they still haven’t been able to find the much-needed closure..

A woman based in Gqebera, who wished to remain anonymous, lost her husband in the tragedy. They had been together for 31 years, she said. As a result, she and some of her children were still on anti-anxiety and antidepressant medication. Now, news of TB Joshua’s death on Saturday has come as another shock.

“I wanted him to answer. I needed a status quo. I needed the closure. I thought that they would do a trust fund for us, and all the promises that our kids would be taken to school… those things never happened,” she said.

She and other affected families have turned to the courts to file a civil claim.

The matter has faced several delays over the past three years and they wanted finality.

“Looking at what my husband was doing, if you calculate seven years now, I’m not expecting anything less than R10 million,” said the widow.

A Benoni woman, who doesn’t want her name disclosed, said she lost her 23-year-old daughter in the collapse.

“She was my princess. If he had told us the real story, we would’ve had closure. I know all the families want closure.”

She said it was painful seeing so many reports praising Joshua because, in her view, he never took accountability for the tragedy or even disclosed what really happened that day.

She and other families filed a civil suit in 2019, which is still before the courts. She said when Joshua received word of this, he offered the claimants R50,000.

“I refused and he said ‘I will give you double the money,’ I still refused. You know, he was so furious to the extent that he started threatening me that he will deal with me and that I will lose all my family members.”

With Joshua gone, she’s now pinning her hopes for closure and justice on Nigerian authorities.