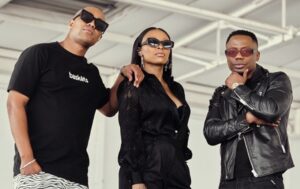 It would seem that DJ Zinhle does not know the meaning of rest. The producer-DJ and businesswoman took to social media recently to announce that she is set to return to popular SABC 1 DJ talent search competition, 1s and 2s. The show is set to air its sixth season with DJ Zinhle at the helm.

This marks the second season that DJ Zinhle has returned to the show following her first judging stint as part of the 1s and 2s Season 5 panel. During the fifth season of the popular SABC 1 show, DJ Zinhle was part of the judging panel with popular producer-DJ and contentious Twitter personality, Prince Kaybee. But it seems like Prince Kaybee has opted to focus on promoting his own music, rather than return.

Therefore, with her announcement that she was set to return as a judge on 1s and 2s, DJ Zinhle announced her co-judges on the returning season of the show. It seems that SABC 1 has brought the big and controversial guns with the new season. The new judges set to join the Umlilo hitmaker are DJ Tira and Speedsta.

DJ Tira has not begun with his social media marketing trail on his upcoming television stint. However, it is easy to see why the SABC decided on the man to join DJ Zinhle. For years now, DJ Tira and SABC 1 have been behind the Come Duze New Year. However, since he moved his Fact Durban Rocks concert to a better paying channel, it was time for the public broadcaster to bring back Mr Makoya Bearings.

Speedsta on the other hand could not wait to share the news. The contentious social media personality has been itching to tell the news since earlier in the month. This is after, Speedsta initially had taken to Twitter to call out leading entertainment news and industry insider, Phil Mphela, telling him that he cannot wait to be featured in one his “Casting news,” post. At the time, Speedsta as much as he teased did not spill the beans. But that changed this week when he took to Twitter to make the news official.