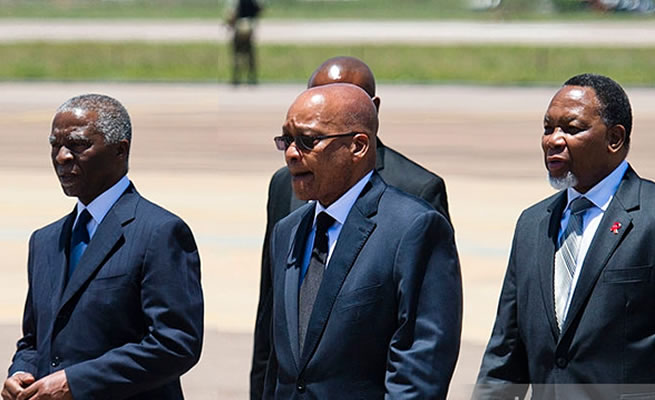 South Africa’s former President is now reportedly so broke that he can’t afford to pay R95,000 per month as maintenance for his estranged wife and their young child.

Lawyers acting for this Mzansi’s former president who was ordered to pay his estranged wife R95,000 a month as interim maintenance ahead of their divorce, were back in court yesterday, saying the judge had got it wrong and he simply cannot afford to pay her that much, supposedly because he is now so broke.

He wants it reduced to R20,000 a month, which is what he proposed initially.
Pietermaritzburg high court acting judge Barry Skinner, who presided over the Rule 43 (interim maintenance) application in early March, had misinterpreted his bank statements – subpoenaed by his estranged wife – which showed large deposits and withdrawals, often in cash.

Payments into his account were “contributions and donations from sympathetic members of the public or donor organisations who support me politically” and should not be deemed “income”.

He said the absence of any monthly payment of R66,000 towards a bond at VBS bank on the statements was because he had stopped a monthly debit order and had been paying it through direct deposits and transfers.

VBS was suing him for more than R7m and he stood to lose his home if he did not pay.

“Inas much as the learned judge drew a number of negative inferences from several cash withdrawals and deposits from my account, they are proof about making direct cash deposits to pay large debts such as VBS.”

He said he gave money monthly to other relatives for living expenses and these were in cash as “I am not a person who uses the latest banking technology or internet facilities”. He said he also owed R13m in legal costs.

Rule 43 rulings are not appealable. They can only be challenged, and varied, if there has been a “material change in financial circumstances”.

The former president said he simply cannot afford to pay maintenance of R95,000 and is presently at a “very high risk” of being in contempt of the order granted earlier this month and a consequence is that he could be sent to jail.

He said VBS Bank was attempting to foreclose on his home and the Rule 43 order, as it stands, “will put me in a position where I can no longer even attempt to honour the payments and my entire family will be left destitute thereafter”.

His estranged wife is opposing the application.

Judge Jerome Mnguni said the matter was not urgent and adjourned it until June.

The parties cannot be named because of a blanket ruling by the Constitutional Court barring the disclosure of parties in divorce proceedings.