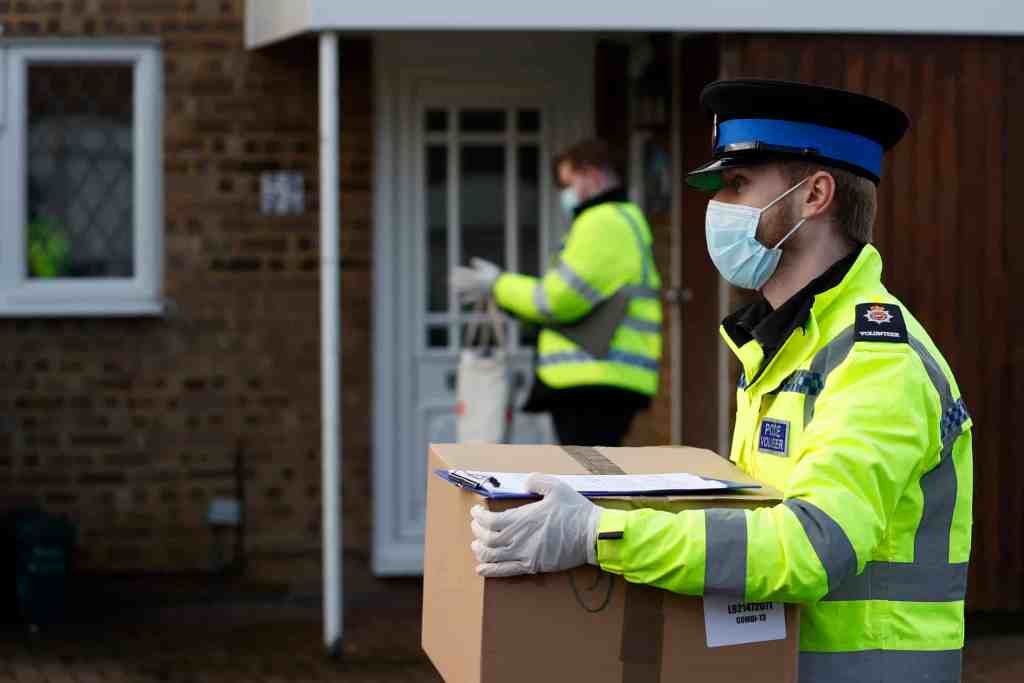 The South African variant of COVID-19 – known as 501Y.V2 – was recently discovered in eight different areas across England, specifically in parts with no travel links to South Africa.

The South African variant was found in Hertfordshire, Surrey, Kent, Walsall, Sefton and in the London boroughs of Merton, Haringey and Ealing. Here’s what we know.

South African COVID-19 variant in England
As reported by The Guardian, this “sparked a two-week spring to test everyone” in the affected areas. To that effect, door-to-door testing will commence on Thursday 4 February in Hertfordshire.

At the time of publishing, one case was identified in Hertfordshire, while two people tested positive for 501Y.V2 in Surrey, “despite having no apparent links to other cases”.

Police officers distribute coronavirus testing kits to local resident in Maidstone, Kent, southeast England as testing for the South African variant of COVID-19 is increased. Photo: AFP/BEN STANSALL AFP)
Steps to stop the spread
Health secretary Matt Hancock told The Guardian that he “ordered an attempt at eradication of the new variant if at all possible”. This includes door-to-door testing and contact-tracing.

“It means public health officials will seek to test 80 000 adults either door-to-door or through additional mobile testing units that Public Health England said will be deployed. Positive tests will be sequenced for their genetic markers to track any further variations”.

In addition, the director of public health for Surrey, Ruth Hutchinson, said it was “a precautionary measure”. Hutchinson explained that “the more cases of the variant we find, the better chance we have at stopping it from spreading further”. 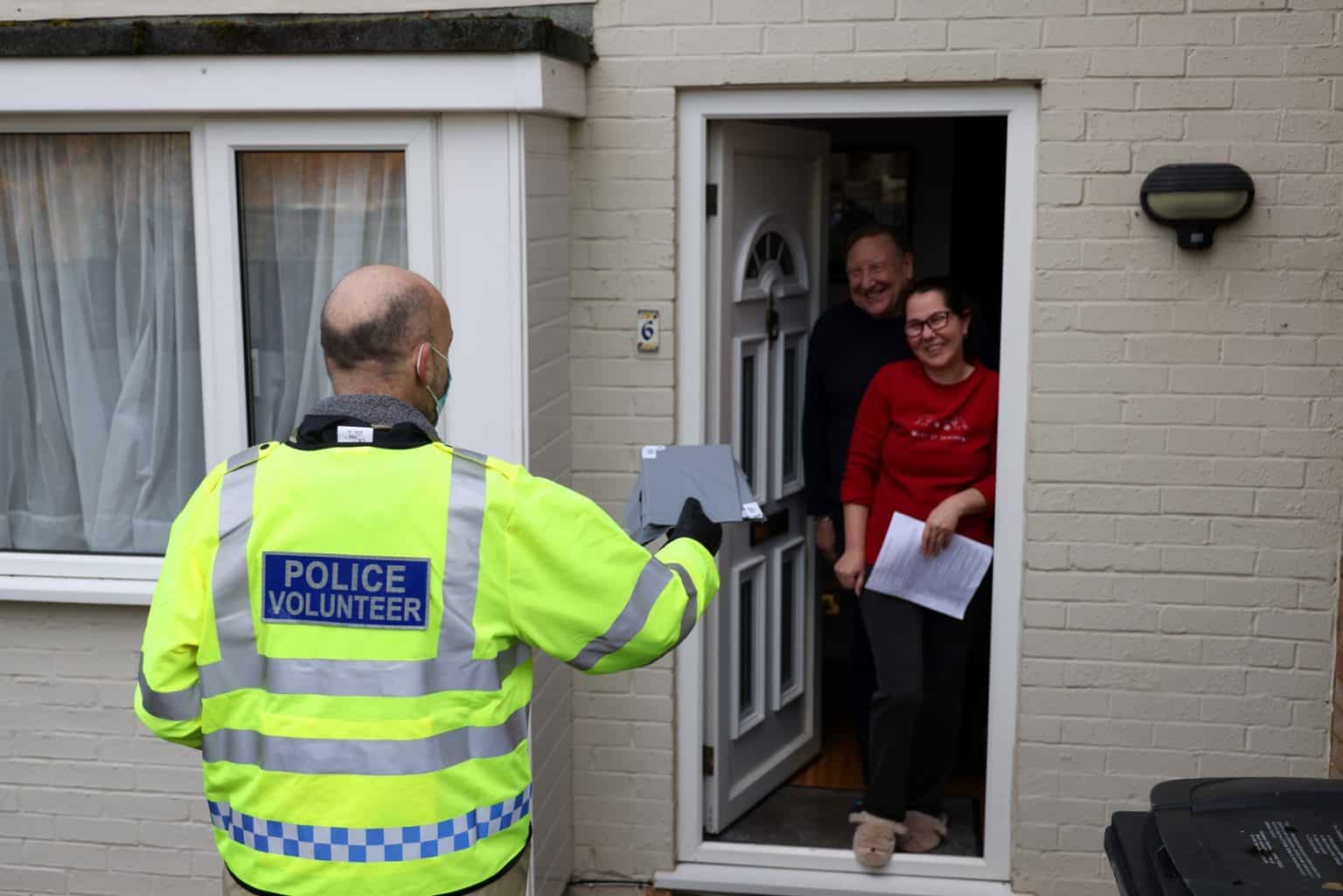 A police volunteer distributes testing kits to residents in the Goldsworth Park and St John’s suburbs of Woking in Surrey on February 2, 2021. Photo: AFP/ADRIAN DENNIS
South African variant 501Y.V2: UK responds
When the South African strain was first detected in Britain, the British Government blamed ‘a number of travellers from South Africa’ for importing a new variant of coronavirus into the country.

At the time, there were 77 reported cases of the new variant found in the UK, and Hancock warned that the new strain “can dodge the vaccine” by claiming that the new variant “was not as well dealt with” by current vaccines.
In the meantime, we’ve got to have a precautionary principle… so we’ve introduced pre-departure testing and we’ve also introduced checks on everybody to check that that has happened. It is absolutely vital that we protect this country from a variant that is not as well dealt with by the vaccine. We cannot risk the progress we have made.” 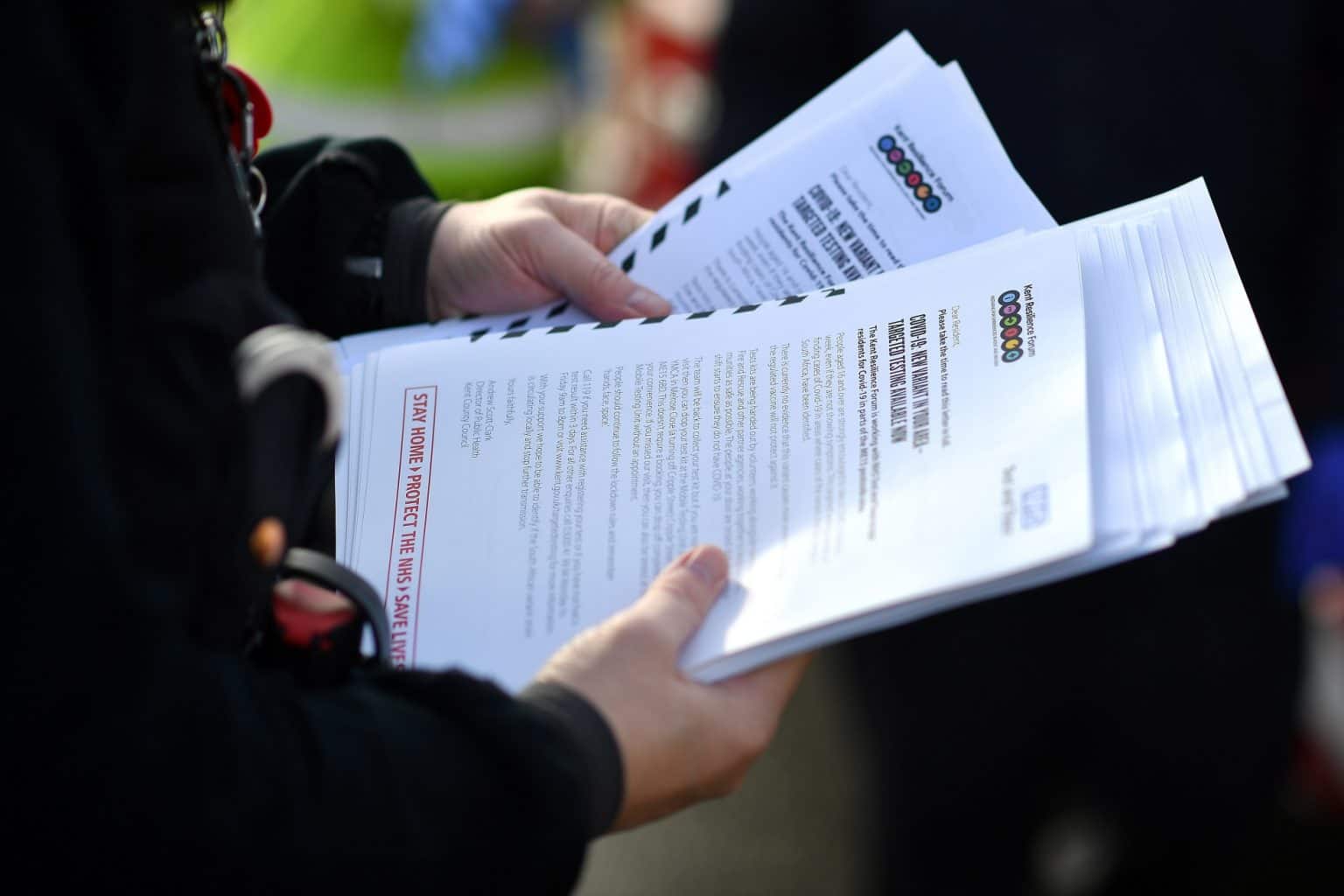 Police volunteers hold information sheets that will be given out with coronavirus tests to local residents in Maidstone, Kent, southeast England. Photo: AFP/BEN STANSALL
Mkhize sets record straight
Hancock also said a failure to tighten border controls “would risk the progress made” by the UK’s vaccination drive, adding the British Government “enhanced contact tracing to do everything” possible to stop the spread”.

That was followed by Health Minister Zweli Mkhize taking on Hancock for his baseless claims. Mkhize set the record straight and said there was no evidence that the 501.V2 variant was” more transmissible” than the UK variant.

There was also no evidence that the 501.V2 could cause a “more severe disease” or increased mortality than the UK variant. The UK strain was detected back in September 2020, a month ahead of the 501Y.V2 variant.
Volunteers, sisters Hanna and Sophie, help to distribute coronavirus testing kits to residents in the Goldsworth Park and St John’s suburbs or Woking in Surrey, southwest of London. Photo: AFP/ADRIAN DENNIS