Sonko’s Daughter Accuses Senator of Attempting to Kill Her

Sonko’s Daughter Accuses Senator of Attempting to Kill Her 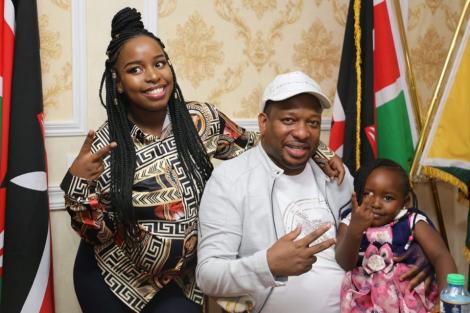 The reports were fuelled by photos and videos of Senator Loitiptip hanging out with a female friend.

Saumu, on Instagram, announced that the two have separated, claiming that she has undergone domestic violence under Loitiptip.

Nairobi Governor Mike Sonko (Centre) strikes a pose with his daughter Saumu Mbuvi (Left) and granddaughter Sasha during his birthday party on March 4, 2020.

“These are the things he did to me,” wrote Saumu, in one of her photos showing a swollen face and bruised lips.

“He almost killed me. I will forever fight for women to stand for their rights. Never allow a man to be violent to you.”

She also claimed that the senator had neglected their child, leaving Saumu as the primary caregiver.

Loitiptip told Kenyans.co.ke that Saumu shared her father’s traits and was suffering from bipolar disorder, threatening to expose her past to prove his claim.

The two have been dating for months and at one point planned to get married. However, Sonko’s daughter clarified that the two had split before officiating their union.

“Wedding date confirmed,” she captioned a picture of herself and the senator in June 2020.

“We started as friends and dated for nine months and we broke up when I was pregnant. He used to beat me and after sharing with friends I went to my dad and told him I couldn’t take it anymore,” she disclosed in a past interview.

Saumu met the senator in Mombasa where she was on holiday and he was there for work.

Nairobi Governor Mike Sonko and exchanging some cake with his daughter Saumu during his birthday party on March 4, 2020.

I’m a passionate lover of writing and news reporting. I developed the passion at a very tender age as my dad was the head of news reporting on National Television. I obtained a degree in Journalism and looking to go for my second degree as soon as possible.
[email protected]