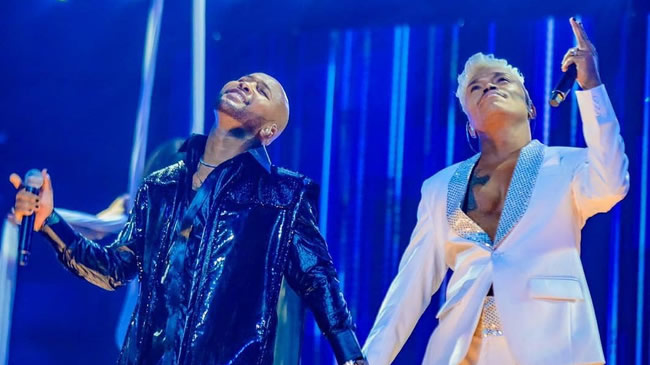 The Mhlongo-Motaung household never gets the chance to catch a small break from trolls who meddle in their business. Even on New Year’s Eve, Somizi Mhlongo and Mohale Motaung’s relationship, as well as Somizi’s friendship with Vusi Nova, was placed under scrutiny by many but Somgaga managed to put many in their place.

The rumours of a love triangle have been circulating for some time now but things quickly escalated following reports of a looming divorce. The couple had been alleged to have separated with Somizi moving out of their marital Dainfern home. The matter was especially sparked by Somizi’s social media posts, where he was seen posing next to one of his properties.

Mohale too was rumoured to be spending less time at their home and was living his best life in the North. Adding fuel to the fire was when Mohale attended his friend’s funeral alone while, his husband was partying a storm in the presence of his “true endless love,” Vusi Nova.”
Allegations of infidelity as well played a major role in the ongoing social media bullying they suffer. It all started when they were still engaged with reports stating that Mohale Motaung, had allegedly two-timed him with a teen identified only as Vuyo Pan.

However, now people are more focused on the fact that Vusi and Somizi are pretty much inseparable as Somgaga celebrated his birthday with Vusi Nova as well as New Year’s Eve. Mohale was nowhere in sight so that served as confirmation for many.

Mohale got dragged for ‘trying too hard’ when he relayed a sweet message to Somgaga which reads; “If someone sat down and tried to outline the qualities that a stellar partner has, I’m sure the list of qualities would include things like loving, caring, kind, sympathetic, strong, compassionate, astute, intelligent, hardworking, driven, humorous, and little would that person writing that list know that they were describing you!”The couple spent Christmas with their own families and for NYE Mohale was at his grandmother’s house, but many expected the two to be in each other’s arms to welcome the year 2021.

Mohale was trending following a video posted by Somgaga and his bestie singing along to Blaq Diamond’s hit song Summer Yomuthi. Again Mohale was nowhere in sight.

Having read all the nasty comments, Somgaga clapped back and asked trolls why are they so invested in their personal matters even on NYE. “I have an ask….to the people who are so invested in my love life…..is your festive that bad that you’re so interested in what’s happening between me, Vusi and Mohale….hayi it must be bad shemmmm askies…..how can I help bathong…[email protected]_motaung babe siza tu. @novavusi love help,” he clapped back.