SO SAD: Our anniversary will never be the same again – Jolidee Matongo’s wife breaks at funeral

SO SAD: Our anniversary will never be the same again – Jolidee Matongo’s wife breaks at funeral 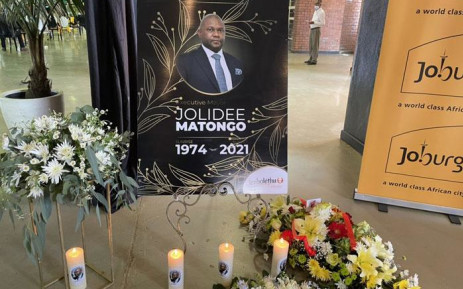 Jolidee Matongo’s wife penned an emotional tribute to her late husband, describing the late Joburg mayor as a loving and caring partner.

Family, friends, and colleagues gathered at the Finetown Hall in Johannesburg on Friday to pay their final respects to Matongo.

The 46-year-old mayor was killed in a car crash last weekend while traveling on the Golden Highway.

He had been campaigning in Soweto with President Cyril Ramaphosa.

Mpho Motsepe read a message on behalf of Matongo’s wife, Kedibone: “Our anniversary will never be the same again because you always ensured that we celebrated it and gave it the prominence that they deserve. On our wedding day, you said ‘we are selling our freedom on Freedom Day’. I am grateful for the love that you have given me and our son.”