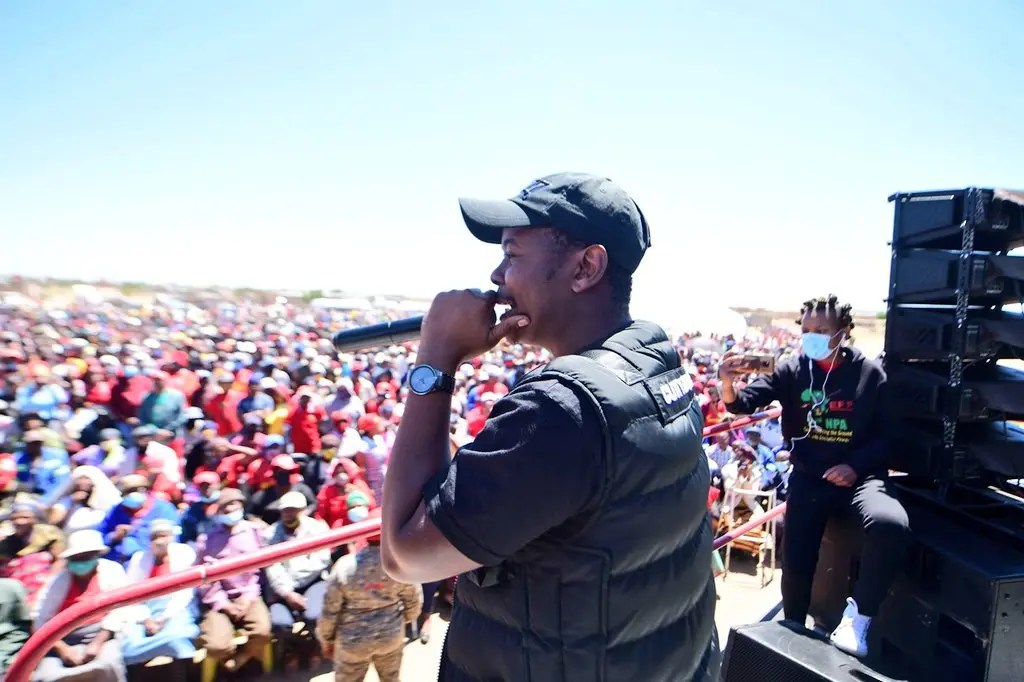 With the elections slated for November 1, Economic Freedom Fighters (EFF) is turning up the heat with its star rallies. The party, which has a massive following of youths, seems to be playing its cards well by inviting star guests to their rallies.

Yes, EFF is holding rallies to drum up support as the November elections draw closer. From tagging in the Mandela’s to their campaign trail, EFF seems to have tagged along Skeem Seem firebrand to do the magic for them too what The Queen actress was also spotted during the rally that Skeem Saam, lead actor T-bose headlined.

Yes, during their recent rally Cornet Mamabolo who is best-known as T-bose on Skeem Saam, was part of the campaigning team for EFF. The actor took the microphone and sang for the audience.

Who knew T-bose could drop the bars. The crowd went wild as the star actor dropped a few lines to get their supporters into the groove. The video has since flooded social media, and many wonder if the actor quit acting for politics.

Up to now, little is known about his exit. However, in the backdrop of his departure, a lot has been said, from being paid peanuts to quitting acting to concentrate on his business. Could he b be pursuing a political career with EFF?

The EFF is making all strides in securing votes for the upcoming elections, and they seem to have found the magic in tagging along with prominent figures.

In recent years it has been the norm of the ruling party ANC of inviting star artists and actors to their rallies for a high turnout of supporters. During the rally, actress and award-winning TV Personality Ntando Duma was also spotted with EFF big wigs during the same rally.

Duma is best known for her unmatched talent on the Mzansi Magic drama series The Queen. The seasoned actor was shown the exit door this July after a fallout with showrunners. In the wake of her, exit Duma hasn’t talked much about her exit.

What got Mzansi talking is the fact that Duma used to be a strong Stewart of ANC. The actress was seen campaigning for EFF on the rally’s sidelines, and his pictures have since flooded social media. The actress shared a series of photos on her timelines indicating that she was a fighter to make matters worse. One of her posts was captioned:

After her posts, Mzansi weighed into the comment sections with its two cents.