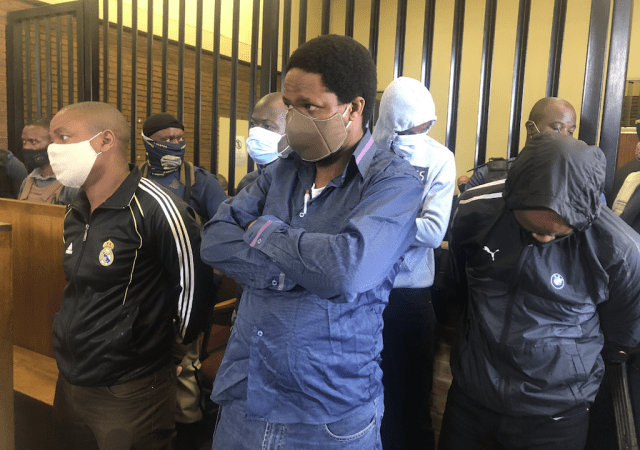 The five suspects linked to the murder of Bafana Bafana and Orlando Pirates goalkeeper Senzo Meyiwa will start their trial in October 15, but AfriForum’s private prosecution unit is disappointed that the mastermind behind the killing is still not arrested.

AfriForum’s private prosecutor Gerrie Nel said he didn’t understand why the mastermind behind the killing has still not been arrested and prosecuted.

AfriForum represents the Meyiwa Family in the case against Muzikawulahlelwa Sibiya, Bongani Ntanzi, Mthobisi Mncube, Mthokosizi Maphisa and Sifosokuhle Ntuli, who are allegedly involved in the footballer’s murder.

The five men appeared in the Boksburg Magistrate’s Court on Friday.

Their case was transferred to the high court and postponed until October 25 for trial.

They are facing five charges, including murder, attempted murder and robbery.

Meyiwa was shot and killed at his girlfriend and singer Kelly Khumalo’s house in Vosloorus, east of Joburg.

According to court documents, Meyiwa was killed in the presence of Khumalo, her mother Gladness, sister Zandi and her boyfriend Longwe Twala, and friends Tumelo Madlala and Mthokozisi Thwala, who were all in the dining room.

Journalists from Independent Media were not allowed in court on Friday and were told it was per Covid-19 protocols while those from TV and other media were in court.

On Friday Nel, speaking outside court to the media, said he did not understand why the case was described as a robbery that went wrong.

“We are very disappointed because the matter is now being transferred on an indictment, and it’s a robbery that went wrong. It is a contractual killing.

“What’s interesting is that I have consulted my clients and they informed me that in October last year the minister of police visited the family and indicated that there is indeed a mastermind.

“He also identified the mastermind.

“But from October last year until now they haven’t taken action, which is very surprising.

“I have also spoken to the police and they feel very strongly that they have a strong enough case.

“So it’s very peculiar that we haven’t seen somebody added to the indictment,” Nel said.

In a letter written to the National Prosecuting Authority (NPA) on March 3, ahead of the court appearance, Nel accused the authority of being reluctant to charge the alleged mastermind.

“The inept handling of this matter has been dealt with in our previous letters and to avoid any repetition, will not repeat same now, safe to say that the unrelenting disinclination to deal with the ‘elephant in the room’, namely the arrest and institution of a prosecution of the mastermind, who allegedly contracted the assassins in this matter, before the the next court appearance will prejudice the case and enhance society’s perception of law enforcement’s ability to deal with a matter of this complexity,” says the letter.

Nel told the NPA that the indictment did not allow them to conclude that Meyiwa was killed in the execution of a contractual assassination.

“Further to our recent briefing, we have been told of new evidence collated since the last postponement and powerlessly experienced the investigating team’s exasperation with the reluctance of the NPA to charge and join the outstanding suspect.

“At the previous court appearance, we publicly stated that there was enough evidence to convince any reasonable prosecutor to prosecute the outstanding suspect and having heard the latest investigative developments, I feel even more confident of our assertions.

“The impasse coupled with what we consider to be the irrational failure to charge the mastermind has created further strain on our client and the family,” Nel said.

He said the issuing of an indictment and transfer of a matter to the high court for a trial was based on an apocryphal fact which would further deteriorate society’s trust in the prosecution and criminal justice system.

“We implore the NPA to clearly state their position.

“Is this the current indictment, inclusive of the killing of the deceased as a result of a struggle where a shot went off, the case that will be presented to the court, or are the prosecutors contemplating (on the current evidently material in the docket) adding more accused and then to file a new indictment?

“If so, when can that be expected?

“More importantly, we beg the question ’why has it not happened?’”

Nel said they were confronted with a perception that the mastermind might be sheltered from prosecution.

“The current unwillingness of the prosecutor to charge him/her exacerbates this perception.”

“Suffice to say, the prosecutor has gone through the docket with a fine tooth comb and believes that there’s insufficient evidence to add another accused on the matter.

“We need evidence that will substantiate the current suspicions because what is in the docket is not sufficient,” said Ngwema.

“The prosecutors will not take decisions based on perceived pressure from interest groups.

“We are led by evidence and for now we need more to be able to add other accused persons.

“If the gaps we see now are closed, the prosecutor will certainly consider charges against more persons,” Ngwema said.

Outside the court on Friday was football supporter Goolam Mohamed, who also lambasted the justice system for failing to bring the matter to its conclusion seven years later.

“This has destroyed us.

“These people have committed such a hideous crime.

“He was a man who took sport as a career and wanted to see South Africa growing into a better community.

“He wanted to bring more into his team.

“This has affected everyone in this country.

“Our tax money is being used to pay prosecutors and judges, even the investigators but they are not working”, he said.