Selimathunzi presenter Zanele Potelwa opens up on her personal life

Selimathunzi presenter Zanele Potelwa opens up on her personal life 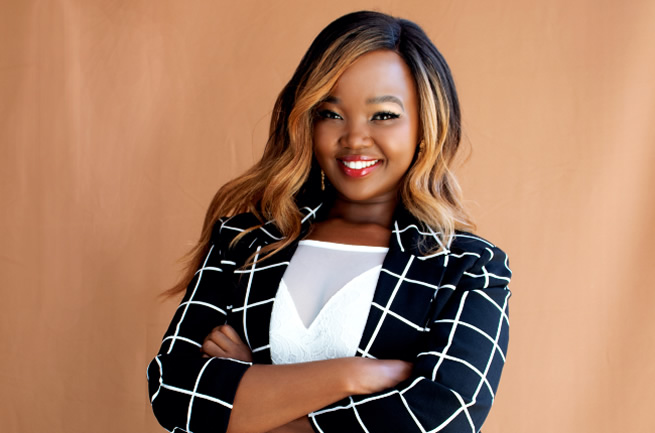 Local television and radio personality Zanele Potelwa is fast-becoming one of the biggest names in the local entertainment space.

Potelwa is a voice on popular youth station 5FM where she serves as the traffic presenter on the station’s weekday breakfast show The Roger Goode Show.

She also hosts the 10am-2pm slot on Sundays. Fans can also find Potelwa on their television screen as a presenter on SABC 1’s popular lifestyle magazine show Selimathunzi.

As she continues on her quest to dominate the local entertainment space, Potelwa opens up about her first taste of entertaining people, what she believes sets her apart and so much more.

Who is Zanele Potelwa when the mic is off and the camera stops rolling?

Zanele Potelwa is a fun-loving girl from the Eastern Cape who has a passion for people and entertainment. I’m on a mission to leave the world a more beautiful place than I found it.

I believe that we’re all put on this earth for a reason and all I want is to live out my purpose and all of my wildest dreams.

When did your love entertainment begin?

My passion for entertainment was ignited long before I ever considered it as a career – 11 years before to be exact.

In Grade 4, I was cast as the witch in our school production of Hansel and Gretel. Everyone told me I did such a good job. I thought I would continue exploring this path because my teachers claimed I was so good at it.

This led to a love for public speaking and being on stage. My journey stemmed from them.

What, in your opinion, is the toughest part when it comes to making it in the entertainment industry in South Africa?

The hurry up and wait process. Some of the greatest names will say you need to trust the process and I am a firm believer that you will never miss what’s yours.

As you keep doing what you can with what you have and working hard and smart, the perfect adventure always comes along and it’s about giving it your all.

What is one talent you wish you had?

If I had the voice of an angel, I’d be Gabriella from High School Musical and sing everything!

I think people who can sing are gifted in such a profound and beautiful way because music truly heals, comforts and brings people together. On that note, I’m excited to be working with one of my 5FM colleagues on the track of a spoken word piece.

What attracted you to both 5FM as a platform and as a television show?

I am passionate about the youth in the country and these two platforms speak directly to the youth. These are both platforms that inspire and entertain.

I believe that I was part of these families long before I joined them officially because I grew up enjoying them and I remember what I used to feel watching and listening to these two platforms.

What has been the biggest lesson you’ve learned from your co-stars on each platform?

I’ve had the privilege of working with some of the most incredible names in the industry and they’ve all taught me the importance of hard work. They’ve also taught me to encourage those who are coming after me because these people have truly always gone out of their way to reassure me about what I do.

What would you say sets you apart from other personalities in the entertainment industry?

My energy! I say that because it’s something that always stands out to anyone from directors to listeners.

I have an energy that’s unique to me. I would also say the fact that I’m a wild card helps me stand out.

What, in your opinion, does the local entertainment industry lack?

I think it lacks opportunities.

Thankfully, the industry opens up more and more every year but I still feel there is so much untapped potential.

I would love to host some of the most prestigious ceremonies in the country.

I also plan on entering the acting space and continuing to grow in television and radio.

I also have big things planned in the entrepreneurial space.