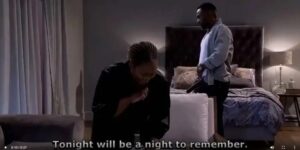 Scandal viewers were left shocked as the character Mbali Khubeka, did the unspeakable by drugging her husband Jojo to conceive with her sister Winnie. Actress Nolwazi Ngubeni nailed the scenes in every aspect.

Mbali comes from a low-income family who struggles to make ends meet. Her family consists of her mother, sister Winnie, and uncle, who loves his liquor. Mbali lied to her in-laws about where she comes from; she said she was from a wealthy, stuck-up family who disapproved of her marriage because her husband Jojo was not educated. To make herself look like a heavenly in love bride who values love over money, she told the Kubeka’s she cut off her family and chose her husband despite his status. When Winnie first visited Mbali in the Kubeka mansion, she called it a palace, and that was the first sign we saw which showed us Mbali had been lying about her background.

Mbali recently suffered a miscarriage, and it wasn’t her first time. The doctor diagnosed her with a womb syndrome that doesn’t allow her to carry a full child term. Mbali was upset over the news. She wants her and Jojo to have a child, so Jojo could have serious ambition to take over Uthuli Waste, the Khubeka family company. If Jojo is in charge, then that would mean she’d have more money to her name.

Mbali served her husband a shot of whiskey with a sedative or tranquillizer and was slightly unconscious. She then blindfolded him with a pink scarf to ensure he didn’t catch a glimpse of her sister Winnie. When Jojo couldn’t see a thing around him, she called Winnie over so she could convince him. The plan is that Winnie gets pregnant then Mbali fakes a pregnancy up to the last hour. When the child is born, she’ll raise it as her own.
Winnie could fall in love with the child and refuse to give Mbali. Winnie could fall in love with Jojo and cause trouble in Mbali’s marriage. Winnie’s boyfriend could force the truth out of Winnie and start blackmailing Mbali, and the possibilities are endless.