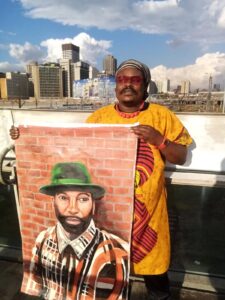 Rasta says he’s not bothered by criticism of the portraits he painted of rapper Riky Rick.

Rasta had tweeps fuming over his tribute portraits after he shared them on his timeline.

Legends never die we multiply. Rest Brada you made us proud👊🏾. A Fashion Guru, a Producer, a Musician and a Motivational Speaker, stay shining👋🏾.#RIPRikyRick, #RIPRickyRick, #AfricanBank, #legendsbarbershop,#CottonFest2022,#BigZuluNkabiRecords pic.twitter.com/eRLdlzHDgC

“The news of his passing was shocking, some things tend to be fake news after a while, so I though it was fake and left my phone until I received calls asking me if it’s true,” he told TshisaLIVE.

The controversial artist recalled a moment he shared with Riky five years ago at Constitutional Hill when he was performing at Basha Uhuru.

“I have a painting of him that I did five years ago and another I did for him in November last year to attend the hip-hop awards which I kept in my studio with the intention of honouring who he was in fashion and in the music industry.

“I remember he came to me and said, ‘Rasta, thank you so much for painting me while I’m sill alive’, that made me feel honoured. I watched him perform, then we spoke about the painting being collected, but we didn’t keep in touch afterwards.”

Rasta said he was affected by the death of the rapper as he had supported and acknowledged his grind.