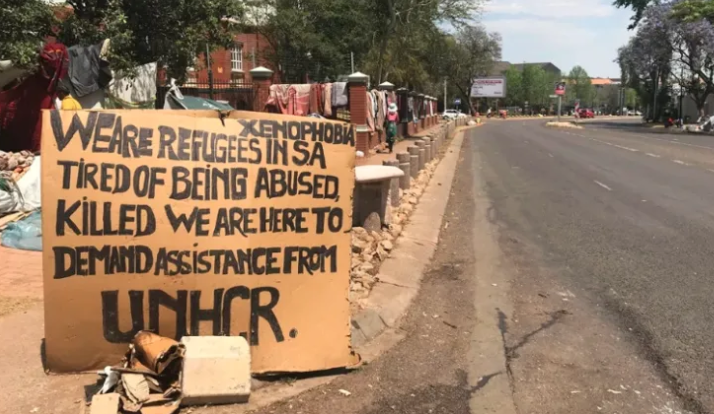 Homeowners from upmarket suburbs in Pretoria are heading to court in an attempt to remove refugees who are staging a sit-in outside the United Nations High Commissioner for Refugees’ (UNHCR) offices.

The Waterkloof Homeowners Association and Brooklyn and Eastern Areas Citizens’ Association have approached the Gauteng High Court in Pretoria on an urgent basis, seeking an order against the refugees, citing the contravention of municipal by-laws.

According to court papers, which News24 has seen, the associations were seeking an order that would essentially interdict and prohibit refugees from living outside the UNHCR’s offices.

The order seeks to prohibit refugees from the following:

· Causing a nuisance to the residents of Brooklyn and Waterkloof.

· Erecting any shelters, shacks or tent.

· Washing and hanging clothing and other items on trees and fences.

The associations also want an order to force the City of Tshwane and police to remove or arrest any refugee who does not comply with the court order or with the laws and by-laws governing the city.

Furthermore, they are seeking an order to force the ministers of police and home affairs to identify those refugees who are legally in South Africa in order for them to be given safe intermediary accommodation.

Inaction by the police

In a founding affidavit, Brooklyn resident Johanna Jacoba de Villiers, who is the secretary of the Brooklyn and Eastern Citizens’ Association, said the sit-in started on October 7 when a group of 50 people stationed themselves outside of the UNHCR’s offices in Pretoria.

“The affected area immediately became a health hazard, with the first respondents [the refugees] committing countless acts in contravention of the municipal by-laws,” De Villiers said.

She added while the police have maintained a presence outside the UNHCR, they have taken no action against the refugees’ alleged unlawful acts, claiming they have chosen to turn a blind eye to the status quo that developed.

According to De Villiers, the police refused to get involved because they said the matter was of a political nature. This was relayed to her by another resident, Lizeth Aucamp, who called the police after she witnessed a refugee defecating on a pavement.

De Villiers said they have refused to accept numerous complaints relating to the refugees.

Aucamp, who is a member of the Brooklyn and Eastern Citizens’ Association, tried to get lobby group AfriForum involved, but after discussions, it was decided that the associations were the most suitable parties to institute legal proceedings.

De Villiers said she was appalled by the inaction of the police, City and other government departments.

The application is expected to be heard on Tuesday.

We have nowhere to go – refugees

Despite being a respondent, refugees outside the UNHCR’s offices had no idea about the court action by the associations, maintaining they have nowhere else to go.

One of the refugee leaders, Democratic Republic of Congo national Alex Mongo, firstly thanked Brooklyn residents for helping them with water, food, and clothing, but then said that it should be the UNHCR which should be evicted.

“As refugees, we are not welcome in the community, we go to the UNHCR for protection, they are right here.”

Mongo added if the UNHCR was evicted, they would follow it.

“If the police want to use force to come and take us out from this place, we are ready. First of all, we are the innocent people, we are not violent, we came because of our problems.

“If they want to come here to remove us, they have to come with a coffin as well because there is no one that will leave here alive.

All the protesting refugees share a common fear – being targeted and becoming victims of xenophobia.

Around 600 refugees, who have been camping outside the UNHCR’s offices in Pretoria since the start of October, want to be resettled in another country, echoing refugees’ pleas in Cape Town.

They were forcibly removed by the police last week following a court interdict.