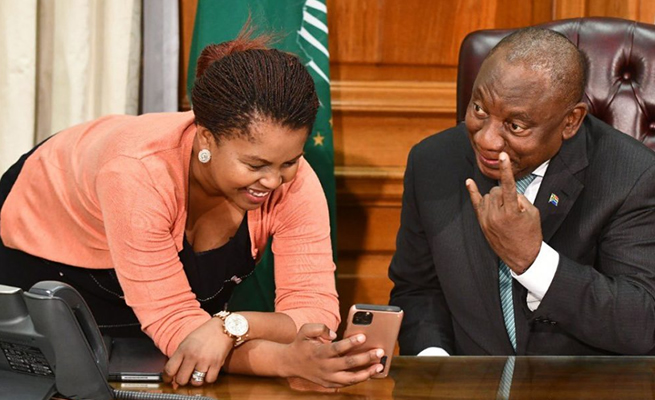 Just over a year after taking a leave of absence from all official roles in government, pending investigations into her role in a dodgy personal protective equipment (PPE) contract between her husband and the Gauteng health department, presidency spokesperson, Khusela Diko has been “reinstated on a warning”.

But Diko will not be speaking on behalf of President Cyril Ramaphosa anytime soon, as she is on maternity leave.

Diko confirmed that she had “noted and welcomed the outcomes of the disciplinary processes undertaken by the presidency” against her and added that she had only been sanctioned for failing to disclose companies she had “resigned from or were now inactive”.

She has been reinstated with a warning.

It’s unclear what form of sanction had been handed to Diko, but sources said she was given a warning.

“I particularly welcome the affirmation in the outcomes of my long-stated position that I have not been dishonest nor have I engaged in any corrupt activities.

“Instead, I have been appropriately sanctioned for failing to disclose companies – with no financial interests – that I had either resigned from or were inactive.

“I did not do any business with the state. I have accordingly done everything I can to completely remove my name wherever it appears on the Companies and Intellectual Property Commission as I have had no business interests or dealings since I joined government in March 2018,” said Diko.

Diko confirmed that “any further action with regard to my return to work will be finalised with my employer at the conclusion of my maternity leave”.

The Sunday World reported over the weekend that Diko had recently given birth to a son reportedly named Milani ZwelamaBhaca Kungawo Diko.

In June 2020, Diko took a special leave of absence after her now late husband, amaBhaca chief Thandisizwe Diko, allegedly secured an irregular Covid-19 PPE tender from the Gauteng health department to the tune of R125 million.

The Special Investigating Unit (SIU) found that the tender was irregular and unlawful.