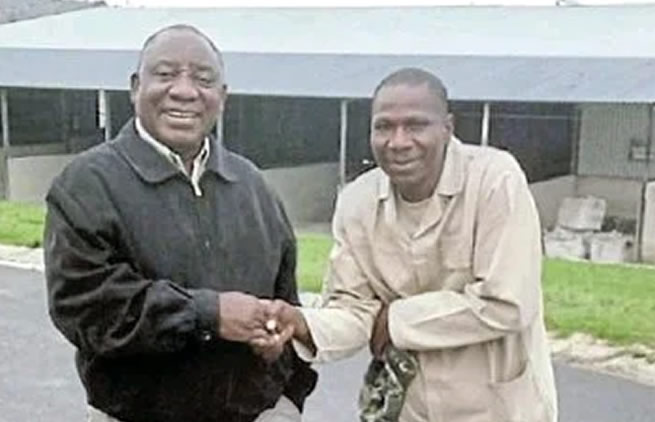 An employee at President Cyril Ramaphosa’ s cattle farm is taking the fight to get his job back to the Commission for Conciliation‚ Mediation and Arbitration (CCMA) after he was fired for missing work for two days when he took ill.

Bennet Mashinini, a security guard at Ntabanyoni farm in Badplaas, Mpumalanga, said he had not been feeling well for more than a week when he decided to visit the Prince Mkholisi Community Health Centre on December 12.

“They did a Covid-19 test and told me that all my symptoms were that of a coronavirus patient and told me to stay at home for 10 days [in isolation]. I called the manager [Ben Molotsi] and informed him about what health-care workers said …”

“While I was at home recovering, I received my results via SMS on December 17 and they were negative. But because I was not feeling well, I had to stick to the 10 days [isolation period] and I stayed at home and went back to work on December 23,” said Mashinini.

However, a virology report indicated that his test had been referred to another lab.

Mashinini said he did not get any other message informing him of the results after that initial SMS.

Little did he know that when he went back to work, where Ramaphosa farms a rare breed of cattle known as Ankole, he would face disciplinary proceedings for misconduct.

Ramaphosa’s spokesperson Tyrone Seale has not responded to requests for comment since Wednesday. He promised to respond by midday yesterday, but his phone went unanswered and he did not respond to text messages.

CCMA spokesperson Amos Tshabalala did not respond to Sowetan’s questions on the matter.

According to the notice of disciplinary hearing, which Sowetan has seen, Molotsi said Mashinini was “misrepresenting facts and/or falsely claiming to self-quarantine after you received your Covid-19 negative test results” and “neglecting your duties to update or inform your employer of your Covid-19 test results” and was “absent for the quarantine period without permission, authorised leave or a valid reason”.

Mashinini was found guilty after a hearing held on January 7.

He was informed of the outcome on January 21, with his dismissal effective from the next day.

He said the charges were fabricated. Molotsi confirmed that Mashinini had made the necessary arrangements with the company after visiting the clinic on December 12.

“We then agreed that he would call the company once results were received. Upon receiving his test results, he failed to contact the company as agreed and when asked why, he said there was something wrong with his phone.

After [receiving] his negative test results, he proceeded to stay home for two days.”

Molotsi said Mashinini “has a bad misconduct history in his employee file and once again, he was pleading to be given another chance”.

“His historical misconduct includes being late for work, absent without permission, being drunk while on duty on numerous occasions, where he also failed a basic alcohol test and was issued with relevant levels of warnings at that time.

“He had always conceded wrongdoing and would, as usual, further plead with management to be given another chance. The trust relationship between Mashinini and the company is destroyed,” said Molotsi.

Molotsi said the hearing was held by an independent labour consultant.

Mashinini rubbished the claims that he had a history of misconduct.

“This is pure lies, he [Molotsi] is lying. I have never failed any alcohol test at work, he must show that to the CCMA or maybe he should have brought it up during the disciplinary hearing.”

He said he could not have come to work late because workers were provided with staff transport.

‘‘ He has a bad misconduct history in his employee file, including being drunk on duty