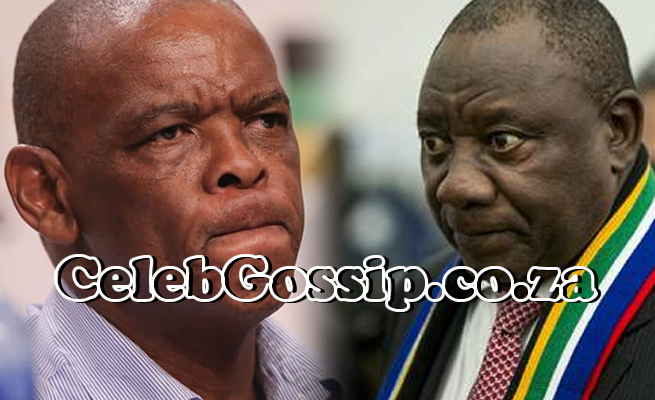 The fallout between President Cyril Ramaphosa and the governing party’s secretary-general Ace Magashule has taken a turn for the worse in the wake of the instruction by the party’s top officials on its MPS to vote in favour of the investigation into the public protector’s fitness to hold office.

Celebgossip has learnt that the deployment of the party’s chairperson Gwede Mantashe on Tuesday instead of Magashule to instruct MPS to vote in favour of a parliamentary process into Busisiwe Mkhwebane’s tenure in office has widened the rift between the two powerful leaders.

An earlier meeting of the officials, ANC insiders said, had not discussed how the party’s parliamentary caucus should deal with Mkhwebane’s matter following a recommendation by an independent panel led by retired Constitutional Court judge Bess Nkabinde, which found there was prima facie evidence of misconduct against the public protector.

The panel recommended a committee of the National Assembly investigate or launch an inquiry into her.

Mkhwebane’s running of the crucial Chapter Nine institution has become a proxy in the raging battle for the control of the ANC between Ramaphosa and Magashule.

Sources close to Magashule claim the former Free State premier refused to go to parliament to communicate the decision of the officials to the ANC caucus, hours before the National Assembly discussed the matter and subsequently voted on it. “Ace refused to communicate the decision. He refused to go to parliament. After Ace refused, the meeting agreed on DD [deputy president David Mabuza] to go address the caucus,” the source said.

“Ace is arguing on an issue of principle and convention. Officials are not a structure.

Major decisions must be processed through the NWC and ratified through the NEC, the highest decision-making body between conferences.” However, this was vehemently denied by Mantashe yesterday. He told Sunday World that Magashule was not deployed to go to the caucus.

“We said the head of the political committee, who is DD [Mabuza] must communicate with the caucus. But he asked to be replaced because he was going to Nongoma to pay his last respects [to late Amazulu King Goodwill Zwelithini], then myself and Paul [Mashatile] went. I am giving you a factual situation. Not a factional situation.

“He [Magashule] did not refuse, he was not deployed,” Mantashe said. Magashule’s allies said he had used the Mkhwebane matter to draw the line in the sand in his tug of war with Ramaphosa.

The longest-serving provincial chairperson of the ANC and the former Free State premier was now going to challenge Ramaphosa openly going forward, those close to him said.

“The gloves are off,” an insider said.

Magashule used his interview with Durban-based radio station Gagasi FM on Thursday to break ranks with his colleagues in the top six, saying the officials were not a structure recognised by the constitution of the governing party.

“The ANC has not actually finalised this matter [Mkhwebane] because officials of the ANC are not a structure in terms of our constitution, so the matter will still be discussed by the NWC [national working committee] and the NEC [national executive committee],” he said. He also praised MPS who did not turn up to vote for the process to investigate Mkhwebane, saying they did the right thing.

On Magashule’s comments in the radio interview, Mantashe said: “That is another mishap. It is a misfire. He [Magashule] must read the constitution of the ANC. In the conference, in electing the national executive committee of the ANC, we elect six top positions first, then elect additional members.

The ANC NEC was meeting this weekend and it was expected that the Mkhwebane matter was going to be a battleground between Ramaphosa and Magashule supporters.

This is after it emerged that most of the 62 ANC MPS who did not vote on the Mkhwebane matter were aligned to Magashule.

In his tenure as ANC secretary-general, Mantashe used to be deployed to the caucus to communicate decisions, including on the motions of no confidence in former president Jacob Zuma.

But Magashule, a staunch Zuma supporter, was snubbed from communicating a decision for the caucus to vote for Zuma’s removal in February 2018. He had already made it clear before, in the run-up to the Mkhwebane vote, that ANC MPS should not vote for the investigation, as this would constitute “sleeping with the enemy”. Ramaphosa was also increasingly communicating the outcomes of NEC meetings, traditionally the role of the secretary-general, and his political overview to the closed meeting was being publicly released in a move to neutralise Magashule.

The next battle would be the selection of the ANC members who will form the majority in the ad-hoc committee to investigate the public protector.

Magashule’s faction scored a major victory when some of his key allies were deployed as chairpersons of parliamentary portfolio committees after the 2019 general elections.

Photos of SA Celebrities who have proven that sometimes you are not Ugly, you are…

Zakwe: Cassper Nyovest is not really a great rapper