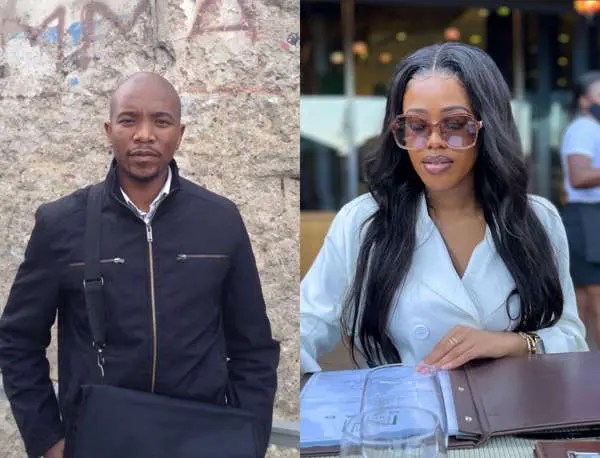 TV actress Natasha Thahane landed herself in trouble a couple of months ago when she revealed that she received a whopping R1 million from the government, to further her studies abroad.

The actress was a guest on Podcast and Chill With Mac when she let it slip that she reached out to politician Baleka Mbete, to assist her get R1-million from the Department of Arts and Culture to further her studies..

This is after being accepted into the New York Film Academy. “I went to maam Baleka Mbete, who was still the Chairperson of Parliament then, I’m like “Mama, I need to go and study,” she said.

“She [ Baleka Mbete] managed to speak to Arts and Culture and then they gave me funding”.

Natasha quickly topped the Twitter trends list and felt the wrath of Twitter users who dragged her for apparently using her family’s influence to secure the meaty funding from the government.

What angered Twitter was that she is the granddaughter of the late Arch-Bishop Desmond Tutu. In a tweet that has since been deleted by popular Twitter user Cellular, who has revealed on several occasions that he has a crush on Natasha. Mmusi Maimane took a jab at Natasha.

“You are living in an ANC nightmare Cellular. We all are. Unfortunately unlike Natasha your buddy not everyone can just make a call and get R1 million to solve their problems. Youth unemployment is over 75%. Corruption is the daily bread of this government,” he tweeted.

You are living in an ANC nightmare Cellular. We all are.

Unfortunately unlike Natasha your buddy not everyone can just make a call and get R1 million to solve their problems.

Youth unemployment is over 75%. Corruption is the daily bread of this government.

Sports, Arts and Culture Minister Nathi Mthethwa revealed that Natasha made a request to study abroad directly from him.

“What we know is that Ms Thahane made a request for financial support towards her studies at the New York Film Academy directly to me as the minister,” he said.

“This request is similar to many others my office and the department constantly receives from members of the public. The public does this possibly because I am the political head of the department,” said Mthethwa.

Natasha later backtracked her statement and denied having received R1 million from Mbete or the Department of Arts and Culture.

I did not receive R1 million from Baleka Mbethe or the department of Arts and culture. If you receive to the interview you would realize that I was taken out of context and before I even go through the process I would profusely like to apologize to Baleka Mbethe and the department of sports and art and culture because when I watch back and listen to the interview it sounds like I have a personal relationship with mam Baleka which is not a case,” she said.

She said her first and last encounter with Baleka Mbete occurred after she was coming out of a meeting. She sought advice from her after being accepted to study at the NYFA.

” She advised me to explore the department of arts and culture because they have funding opportunities and that was the first and last conversation. She did not make any calls on my behalf,” she said. According to her, she obtained R350 000 from the department, and the rest was provided by her family.