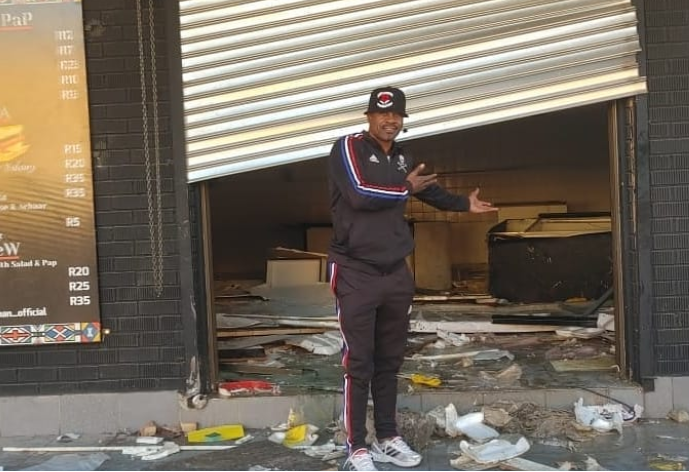 The ‘Grootman’ restaurant owned by former Orlando Pirates legend Lucky Lekgwathi was left in ruins after it was destroyed and pillaged by looters in Kliptown, Soweto, on Monday.

The 44-year-old Lekgwathi, a former Pirates captain, took to social media to show what was left of the eatery, which he opened barely three months ago. In one post, Lekgwathi throws up his hands in despair and declares: “I leave everything to the Almighty God” after seeing the eatery reduced to a burnt-out shell.

Lucky Lekgwathi's restaurant is not even three months old. Now is in complete and utter ruin. Tomorrow when he's struggling, the same people who ruined his business and his livelihood will say he wasted his money when he was playing football. pic.twitter.com/ek0euPlyUb

Moments after Lekgwathi’s posts appeared, many on social media expressed shock and outrage. One sympathetic user said: “Lucky Lekgwathi was only trying to make a living”.

At the height of his career, Pirates fans affectionately referred to him as ‘Captain my Captain’. He was a member of the South African team that lifted the Cosafa Cup (2002). He has 14 Bafana Bafana caps.

Opened in April this year, today it was looted and damaged.

Lucky Lekgwathi was only trying to make a living. pic.twitter.com/ZLmH9gnrlx

The restaurant’s name ‘Grootman’ was the nickname given to him by Pirates supporters after he retired and was considered to be a senior person in society. He was Pirates’ longest-serving captain.

Lekgwathi said the looters cleaned out the premises and stole stock, furniture, machines and computers.

He said the setback was also devastating for the Soweto people who were employed at the restaurant.