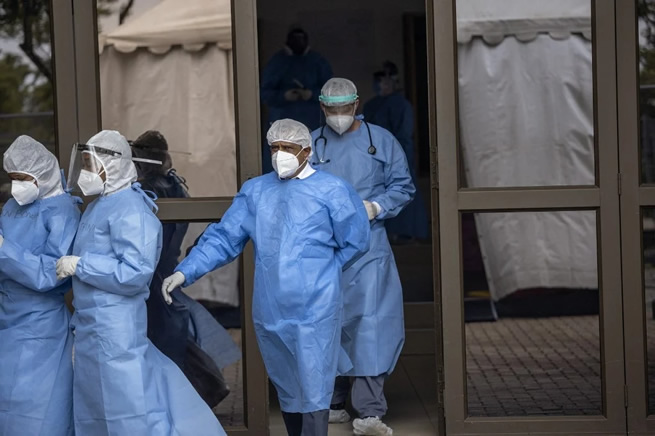 As Gauteng grapples with the third wave of Covid-19, hospitals are so overwhelmed that medical personnel are now effectively choosing who to try and save.

Gauteng medical personnel have described the pain of choosing who lives or dies because of the shortage of beds and oxygen in the province, which is currently the pandemic’s epicentre in the country.

A doctor, from a private hospital, who asked to remain anonymous, told News24 the hospital had to go on divert daily for the past three weeks, turning patients away as there were no ICU beds available.

To illustrate the calamity of the third wave of infections, the doctor said, before the pandemic, between one and three people would die in ICU every month. On Tuesday night, seven people died of Covid-19.

“With the hospital overrun, there just aren’t enough resources to care for everyone,” he said.

“People are waiting outside; ambulances are standing in queues at hospitals waiting to offload the sick.”

He said the situation had become so untenable that doctors now had to decide which patients could be saved and which ones were beyond help.

“We are trying to help the survivors versus every sick person because we can’t help everyone.”

Begging that people stay at home, the doctor said:

“This is not a wave; this is a tsunami. Reversing this runaway train is going to be almost impossible. We don’t have the capacity or resources.”

A Gauteng paramedic, who did not want to be named, confirmed the statements made by doctors about waiting times at hospitals and bed availability.

“We often sit between four to five hours in the ambulance, with the patient, until a bed is freed up at the hospital,” he said.

He added that hospitals have also diverted ambulances because they don’t have the capacity to take patients.

The paramedic said they were experiencing a much higher call volume for Covid-19 cases now than with the first and second wave of infections.

“The previous two waves, we weren’t this busy. We are doing a lot more Covid-19 cases.”

He also noted that patients in the first two waves were far more stable. He said the patients they were picking up now were far sicker, with lower oxygen levels.

Bayanda Gumede, chief nephrology technologist at a renal clinic, west of Johannesburg, confirmed this, adding there was not enough oxygen at facilities.

“Patients come to the hospital and deteriorate very quickly. We are losing people because there aren’t enough resources. We don’t have enough beds, ventilators and oxygen. When patients are admitted to hospitals, they also deteriorate very fast, something we didn’t see in the first two waves.”

Gumede said when patients come to his facility, they need oxygen and a referral to hospitals.

“I work closely with hospitals, and they hope that I can refer them, but it is full. The other day we waited for four hours for an ambulance and, when the paramedics arrived, they said hospitals were full and were diverting patients.

“We now have to choose who to help. We try and help those who are gasping for air. Patients are not even making it to high care when they get to hospitals. That’s how bad the situation is.”

He said the high number of people showing up sick was worrisome.

“We thought that a lot of people were infected in the second wave, and community immunity had built up. We were wrong. The number of sick people is very concerning.”

A Gauteng ICU nurse said she had never experienced anything like the third wave.

“This is worse than the first and second waves. We’re seeing younger people, without any underlying conditions – and many of them fit – dying.

“Compared to the first and second waves, this wave feels worse. I feel like, if you’re now going to be put onto a ventilator, you won’t make it. If you’re on a ventilator now, you probably won’t be walking out of the hospital.

She added the situation was so dire that new people were being put into beds barely 30 minutes after the previous occupant had died.

She said:
Patients see their neighbours in the intensive care units (ICU) or the high care wards being intubated, and then they see them die, in the beds next to them. We fill those beds with new patients the moment Doves or Avbob (funeral undertakers) take the bodies away. It takes us 30 minutes from the moment someone dies to the moment we put someone new in the bed.

Rich Sicina, a nurse, and spokesperson for the Young Nurses Indaba, said: “Nurses are overworked and tired. The system is going to collapse. There is nothing the government has done to improve healthcare since the pandemic started. They will tell you about the additional nurses they hired. But those nurses make no difference because we were understaffed anyway. We needed them even before the pandemic.”

Last September, Health Minister Zweli Mkhize, who is now on special leave, said 13 135 nurses had been employed to assist during the pandemic.

Sicina said nurses were overstretched and had to balance between caring for patients in wards and doing vaccinations.

“Some of the nurses, themselves, are not vaccinated yet.”