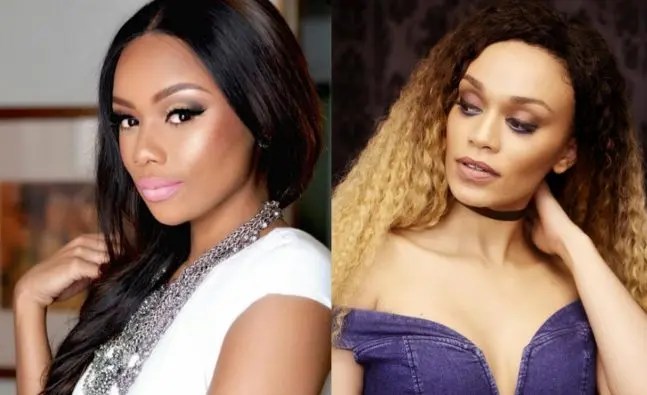 Pearl Thusi is not about to let another woman’s heartbreak be made a mockery – even if that woman is someone she does not get a long with. The media personality defended Bonang Matheba when news got out that she had been double played by her former management company and is no longer a shareholder of House Of BNG.

Witnessing the rejoicing happening all over social media where people pulled out their “I told you so’s” to Bonang, Pearl called out the trolls and critics, saying there is nothing to celebrate.

She said those who are celebrating this difficult time in Bonang’s life, are witches and are capable of murder. She then added, “Don’t ever be happy when someone is suffering. It only exposes lack of empathy, self esteem and maturity. Only a witch celebrates such outcomes.”

Celebrating a turbulent time in someone else’s life is proof of ub’thakathi.

Don’t ever be happy when someone is suffering. It only exposes lack of empathy, self esteem and maturity.
Only a witch celebrates such outcomes.

This support from Pearl Thusi comes as a shock because she was once caught on camera making fun of Bonang’s abuse story. Bonang’s bruised and scarred face allegedly at the hands of Euphonik, made rounds all over social media and instead of women showing her support, they laughed behind her back.

Euphonik called her ‘Hlanyo’ (crazy woman) which set people off. A video of Pearl and Linda Moeketsi cheerleading for Euphonik and calling themselves Hlanyo was dug up and trended again, despite having happened years ago.

The drama in Bonang’s life started when she announced that she had parted ways with Celebrity Services Africa (CSA) Global. In a short Twitter space, Bonang said she suspects unsavoury behaviour, laced with criminalities.

“Today I wish to share with you some disturbing news. So over the last few years I have been in a business relationship with a management group to represent my brand. I have put my trust in them and gave them stewardship over brand Bonang to build and support it across all mediums including entertainment, fashion, and entrepreneurship,” she said.

“Today I announce that I have terminated the contract with them and they no longer represent me, or any of my business ventures. Furthermore, I have instructed my lawyers to investigate the possibility of criminal conduct by the company and its representatives. I will revert over the next few days with more updates so that others can be aware of what I consider as their very unsavoury behaviour,” Bonang said before her space crashed.

Hitting back at B, the company said: “For the record, @Bonang Ms Matheba is currently in breach of multiple contracts with various clients as she has been derelict to these brands and indeed her own for the past six months. There is no merit in these scandalous allegation, we look forward to the day in court with @Bonang; exposing the false and half truths that she has been spreading.

“We are currently awaiting a response from @Bonang’s lawyers on legal letters already sent,” they wrote.