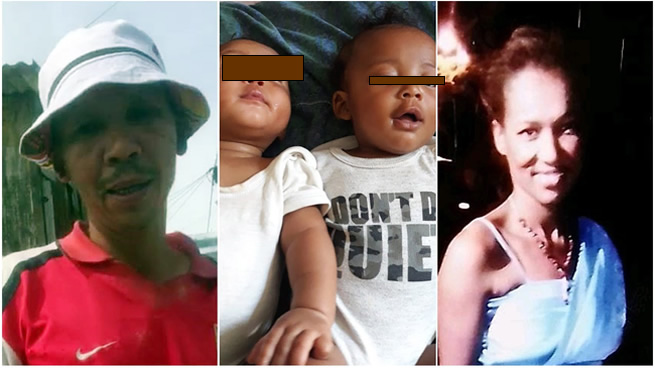 A family of four, including six-month-old twins, perished when their house burnt down in Delft South on Saturday night.

Parents Basil Blaauw, 40, and Jessica Moses, 38, together with their twin babies Kaleb and Kyle were trapped inside their shack that caught fire at around 11 pm.

The couple’s two older sons were not at home at the time.

It is not clear how the fire started, says Jessica’s sister Joanne Moses, 29, adding that the family is left devastated.

“It was not long after Basil returned from the shops to buy something that the fire started,” she explains.

“The neighbours tried to help, but the fire spread so quickly that no one could do anything about it. By the time the firefighters arrived, that shack was burnt to the ground.

“They were crying for help, my sister died a painful death with her partner and children.

“It came as a shock when we got the news that they all died in that fire.”

She says they are thankful that the couple’s sons, Ruzer, 8, and Aden, 12, were not at home at the time.

“One of them fell asleep at a neighbour’s house while the other was still playing outside with other children,” says Joanne.

She says the shack was gutted and the two boys have been left with nothing.

But support has been pouring in for the brothers with people offering food and clothing.

“People I have never seen before have been coming here passing their condolences.

“They were both good people and loved by everyone. I also think the death of the twins shocked most people. We appreciate the support we have received.”

The aunt says she will now be looking after her orphaned nephews.

Subcouncil chairperson Angus McKenzie says he visited the family “and provided much needed relief and support”.

“I am appealing to communities, organisations and individuals to dig deep to help these young children battle this cross that has been placed in their way,” he says.

The Cape Coloured Congress also visited the family and promised to assist with the funeral.

“We will cover all the burial costs for the family,” says Delft branch chairperson Isgak Bejager.

The cause of the fire is yet to be determined, she says.