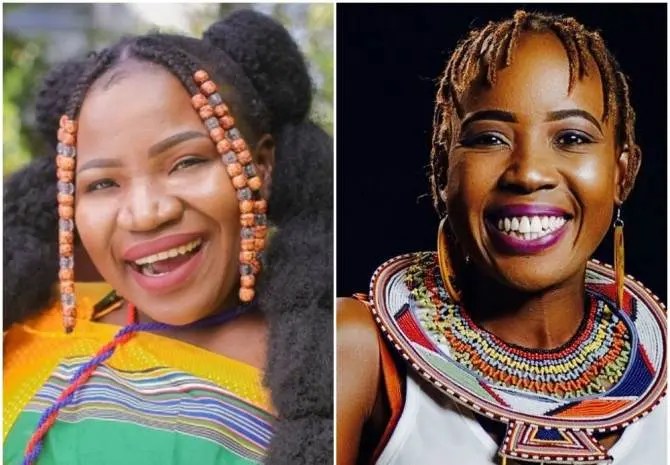 Controversial poet Ntsiki Mazwai has once again put pen to paper and shared her thoughts on Makhadzi. Makhadzi has been trending her recent days after the ANC regalia outfit went viral. Makhadzi had been invited to meet South African president Cyril Ramaphosa and decided to wear ANC colors. This did not go down well with some of her fans who warned her to stay out of politics. Ntsiki Mazwai and Makhadzi have been trending on social media.

Now Ntsiki Mazwai has decided to add her two cents to the issue.

In her letter, Ntsiki starts off by singing Makhadzi’s praises for her taking the South African music industry by storm with her electric dance moves and a magical voice to match.

“l want to tell you what a brilliant talent you are. How we have watched your energy sweep over this nation without provocation. How you have set the country alight during probably the most difficult time of our Era. Your fresh and youthful energy has literally drugged the masses of this country. Sisi, you hold a lot of power right now,” she said.

Ntsiki says times have changed now. She says when Brenda wore the ANC colours they represented something powerful but now the ANC allegedly represents poverty.

Unlike Brenda Fassie, who wore the ANC colors at the dawn of democracy… We had never had a black president before. So when Brenda Fassie put on those colors they represented something powerful. The only thing ANC represents right now is poverty, corruption, and elitism. Are you sure you want to pick sides so early in your career? ANC used to be a liberation movement, but what has it become today?

Ntsiki's open letter to Makhadzi is powerful man. Let me screenshot for ya all elites of Twitter from the Facebook village

She says Makhadzi is ” now being used to mobilize the people with a brand you built from pure creative energy.”

“I agree it’s very exciting to get a call from the president, and I can assure you ANC was going to post you. By posting before them, you gave them the power and you influenced your people towards them. Yazi, you could have been that girl who just posted a ‘thank you for inviting me’ replying to THEIR tweet. That way you would have retained your power and taken the money. Doing a social media post for them benefitted them more than it benefited you.”

In ending, she advised her to guard her integrity and influence.” My advice to you is to guard your integrity and influence with your life, don’t allow your beautiful gift to be used to sanitize politicians, that’s not your role. The politicians must compete in service delivery and stop trying to ride your wave for relevance. Sister you matter right now, in your freedom of association please remember that your fan base spreads across the t-shirts. When you choose a color you alienate the others.